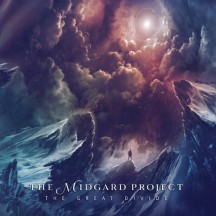 
Of the two Projects that ex-Iced Earth singers have recently moved onto, at least one of them’s worked out well.

For reasons that don’t need repeating, Iced Earth are no longer particularly active. Stu Block’s initial feelings about the events that instigated this remain unclear, but the upshot was that he was eventually looking for new ways to express his musical talents. In the process, he has rejoined Into Eternity, the band in which he built the reputation that earned him an invite to Iced Earth, and he has also contributed as a session vocalist to two records released in 2022. While Annihilator’s Metal II may not live all that long or fondly in the memory, his work with The Midgard Project has turned out rather more successfully.

The Midgard Project is the, erm, project of Marty Midgard (which is a very badass surname if it’s actually his real name). It is ostensibly a one-man band, but Midgard has recruited the talents of Dennis Dumphy as a session drummer for both debut record Music Of The Spheres and belated follow-up The Great Divide. While Dumphy has remained intact, the vocal mantle has moved from Rob Lundgren to Block, who fits the music on The Great Divide like a glove. While I still hope that the insane falsettos from his first stint in Into Eternity will return as a consistent feature at some point, their brief appearances on this album (especially when they are layered into the chorus of “Winter Slumber”, the most Into Eternity-esque track on the album) go down well, and his more low-to-mid range that he established in Iced Earth continues to sound great against Midgard’s backdrop of progressive power metal.

When you think of progressive power metal bands, Symphony X likely come to mind, and they are probably the most obvious point of comparison for The Great Divide, particularly as the album hits the midway point. The synth/riff/Block combo in the first verse of “The Wolf And The Raven” is quintessential turn-of-the-millennium Symphony X, while the technical introductory riff to the title track will send your mind shooting right towards “Inferno (Unleash The Fire)”. Still, there’s much more to The Great Divide than Symphony X worship, even if the third piece of the puzzle as far as The Midgard Project is concerned is Midgard’s symphonic aspirations, which are most naked at the beginning of the album as synths and semi-operatic vocals introduce the record; after this theatrical opening, the symphonic elements are mostly confined to background synths that occasionally flirt with the front of the stage.

Of note, the ratio of ‘progressive’ to ‘power’ shifts from the former to the latter as the album progresses. For the first three songs, there’s more of a tendency to use the chorus as a slow, grandiose moment to grandstand in between the faster, gnarlier riffs; this is most true on “At The Failing Of Light”, but can also initially be said about “Torch Of The Unbroken” (with the caveat that once the first chorus is out of the way, the faster riffs vanish, and the rest of the track is a voyage of tender emotions, with a very melodic solo later on). After this point, The Great Divide turns into a power metal album, but outside of the aforementioned moments, not necessarily in the vein of Symphony X. The rousing triplet chugs driving the chorus of “The Wolf And The Raven” is probably the closest The Great Divide flirts with Iced Earth’s signature sound, albeit with a Europower keyboard sheen, while the title track’s chorus has less a sheen and more a slathering of Europower charm. “Yuki-Onna” initially wallows in acoustic folk before letting loose with a triumphantly rampant second half, while “Mimir’s Well” flips that formula by starting off firing on all cylinders, only to tone things down for its climax.

All things considered, The Great Divide is a pretty solid and entertaining prog/power release. Arguably its biggest limitation in my eyes is the production, which I find gives the album, including Block’s vocals, an unfortunate flatness that restricts the grandeur that the album seeks to convey. This also applies a bit to the ‘symphonics’, which can sound a tad ‘Fisher Price’ in places. While I don’t think the production overly sabotages the album, nor do I think that it’s the only thing holding it back from moving from ‘good’ to ‘great’, it’s probably the easiest element to pinpoint as having real scope to improve. Beyond that, while I’m not blown away by The Great Divide, I do think that it is a promising prog/power effort, and if Midgard can keep Block involved going forward, the talent is there to step up to the next level.

Written on 13.06.2022 by
musclassia
Hey chief let's talk why not
More reviews by musclassia ››