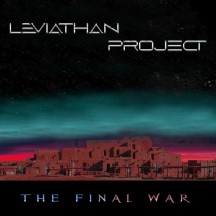 
Of the two ex-Iced Earth singers that recently moved onto Projects, one of them was wise enough to reconsider their commitment to said Project.

As I work from home and have limited meetings during the day, I’m free to spend my Fridays and Mondays scouring the new releases in the Metal Storm database and other websites (shout out to Heavy Blog Is Heavy); however, given the sheer volume of releases every week, I can’t afford to listen to all of them, so I give each album 30-60 seconds to convince me that a full playthrough could be fruitful before I move on. When I gave Leviathan Project’s The Final War that 30 seconds, I was confident, more than with most bands, that further listening was not necessary, and swiftly placed it on the discard pile. However, when I then saw that Tim “Ripper” Owens was listed as the band’s vocalist in our database, I had to come back to it; I know Owens has been involved with a lot of bands (of very variable quality), but I thought, surely he wouldn’t be associated with something that, even from 30 seconds, sounded this unconvincing? As it turns out, he was associated with it, but not any longer. Moreover, yes, The Final War is this bad.

I went back and had a quick skim of Leviathan Project’s debut, which featured not only Owens, but Bobby Koeble of Death - Symbolic fame, and the shift in vocal style between the albums is perplexing. I’m not sure who is actually doing the vocals anymore; as only band founder TK (one-time touring guitarist of Britny Fox), Matt Nardo (producer/bassist) and James Nathan Lowe (drums) are still credited as members in the spiel that I can find for this record, I’m going to guess that it’s TK. If that’s the case, I would offer this advice: I’m sure it’s not easy finding vocalists, but if you can get Ripper Owens to feature on your band’s debut, I feel like it must be possible to find someone else with talent willing to take his place, and I would 100% recommend trying to find them.

When I begun my first full playthrough of The Final War, once the vocals came in after 30 seconds or so, I assumed that it’s meant to be a ‘creepy’ spoken word introduction that will soon make way for actual singing in the chorus. As the track progresses and there’s no let-up in the croaky, semi-whispered/semi-rasped spoken word delivery, I still was thinking ‘oh, so it’s going to be like this for the first song, and then they’ll have actual singing after this’. However, once “Trapped” is under way, it’s clear that no, this is what it’s going to be like for the whole album, which just leaves me thinking: why? I know Iced Earth did something similar with the A Narrative Soundscape album earlier this year, but by every stretch of the imagination, that’s something to avoid, not to replicate, even if TK is such an Iced Earth fan that he only recruited Owens because of his time in that band. I can only assume that this spoken word approach was taken due to a lack of confidence from TK in his own singing or harsh vocals, which to me underlines the necessity of getting a ‘proper’ vocalist.

Still, despite dedicating the previous few paragraphs to the vocals on The Final War, they’re not actually the weakest or most perplexing thing about the album. The weirdest thing is that, to begin with, the instrumentals don’t actually sound terrible; the production is a bit rough, but the guitar leads and gothic grooves of “Origin Of Life” are actually perfectly listenable. However, everything goes south very quickly from here on in; “Trapped” is an immediate downgrade, with its soulless, tinny chugs and awful keyboards (I mention in my review of Stu Block’s album with The Midgard Project that the keyboards there aren’t always great, but compared to this, they’re golden), and “Frequency” is similarly flat. Additionally, given how short all these songs are, the constant shifts in style from gothic metal to attempts at heavy/power are very whiplash-inducing, albeit nothing compared with what’s to follow.

Perhaps the ‘highlight’ of the album, “Monolith” is a two-minute instrumental that allows one to take a break from those vocals, but after it’s over, The Final War takes that inconsistency in style and turns it up to 11 with an incomprehensible detour into lo-fi black metal on “Ascension”. That is, I assume it’s meant to be black metal due to the guitar tone and the increased croakiness in the vocals, but given that the drums are (if you can just about hear them in the mix beneath those chords) plodding along at mid-tempo, maybe it’s not. Whatever “Ascension” is meant to be, it’s a catastrophic ‘swing and a miss’. Still, Leviathan Project commit to this ‘recorded on a 2000s mobile phone’ aesthetic for “The Tower” and “To The Moon”, but not before doing a temporary 180 for the slightly better-produced but very disjointed “Drown You”.

I wouldn’t have written this review if The Final War was recorded by some teenagers making their first steps as musicians; I would understand how it could come out sounding like this, and it would be cruel to mock someone’s first attempt at music knowing that they’re still in the infancy of their journey. However, Leviathan Project not only has had musicians of genuine pedigree involved within the past year (with a clearly better outcome, even if only relative to this record), but their mastermind has experience in the music industry going back for over a decade, so I don’t understand how TK and his associates listened to this final product and thought ‘yes, this sounds like something that is ready to be made available to the public’. If anyone from the band stumbles across this review and comes here to call me out for being a dick, fair enough; I don’t like going in this hard on someone’s passion project, but for what it’s worth, this has to be one of the worst albums I’ve ever heard.

Written on 13.06.2022 by
musclassia
Hey chief let's talk why not
More reviews by musclassia ››