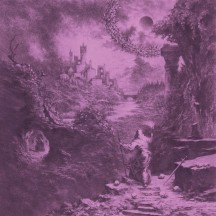 
Not all music that sticks its tongue firmly in its cheek is that good, but there's a sweet sweet spot in music that embraces its own ridiculousness without compromising its quality.

I mean, take a look at Devil Master's Metal-Archives pic. Look at the band members' pseudonyms. Something feels like clearly the band is aware and playing into some of the cheese that comes packaged with the old school black metal vibe. It is maybe not as evident in the cover art, which is admittedly a really great one, nor does "Ecstasies Of Never Ending Night" sound like as raunchy of a title as "Satan Spits On Children Of Light". Regardless of whether Devil Master are completely serious or they're tongue-in-cheek, the music on Ecstasies Of Never Ending Night is something that's definitely worth taking seriously.

With a bit in terms of lineup changes, reducing the sextet from Satan Spits On Children Of Light to a more manageable quartet, Devil Master sound even more burnished both in how organic and polished the sound is, and in how the genre mixes here makes the music sound even more direct. Despite the clear black metal aesthetic, a lot of the music cloaks itself in its cold second wave atmospheres and ghastly roars while letting the goth rock and death rock undertones that were already present on Satan Spits On Children Of Light take even more of the sound, even overtaking the crust punk element this time around. It's something you could simply call "black 'n' roll" and you wouldn't be amiss, but Devil Master really marry the gothic aesthetics of all of these sounds.

Of course, there's more to Ecstasies Of Never Ending Night than just an improved sound quality and a nice genre blend. The biggest upside is that it's just a really fun album, somehow contrasting with how unengaging I found Darkthrone's recent material yet living in a somewhat similar space. The melodies on display are fantastic, and even if the vocals do sometimes feel like the weaker element, there's a certain campiness to them that doesn't feel like it detracts from the music itself. And indeed, there's a campiness that permeates the entirety of Ecstasies Of Never Ending Night, making its entire grimness even easier to engage with. It's maybe a bit less wild and spontaneous that it's predecessor, but that feels more like the result of a band that is more in control of its own side rather than any slowing down of their energy.

So maybe most metal would get better if it stopped taking itself so darn seriously, while still taking its songwriting seriously.

Written on 15.06.2022 by
RaduP
Doesn't matter that much to me if you agree with me, as long as you checked the album out.
More reviews by RaduP ››