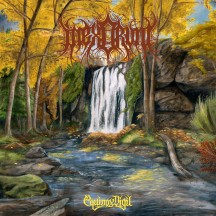 You know that we have all the four aforementioned genre tags as categories in our Metal Storm Awards. Wanna know how often our nominees from the meloblack category get write-in voted in the black one anyway? A lot. Wanna know often our nominees from the melodeath category get voted in the death category? Still more than we'd like but nowhere near as much. Wanna know how often we had to debate whether it's even worth making a distinction between black and meloblack and trying to figure out exactly where to draw the line? I am not at liberty to disclose that. The truth is, there is a lot of melody in black metal, and even in death metal, but black metal has been more open to experimenting with acoustic passages, long-winded atmospheric emphasis, clean vocals, melodic riffs, while still retaining a clear black metal presence.

Inexorum doesn't really do anything too out of the ordinary for black metal. Even without any extra instrumentation, there's a clear pagan folk presence in the instrumentation, making it sound fairly close to something like Windir and Thrawsunblat. But black and folk metal are one of the two metal genres that have had the most intertwining, so it feels completely natural. So I could just call it a mix of black metal and folk metal's melodies. I mean, those shrieks are unquestionably black metal. But listening to the riffs, I'm hard pressed to find any of them I'd call black metal riffs. Riffs that I would find naturally in a black metal song? Sure. Black metal riffs? No. There's a slight difference. It's like black metal had, in time, all its true black metal riffs replaced with melodic riffs. You don't notice it when it happens in each step, but soon enough you find that every riff has been replaced, and it's no longer the ship of Theseus.

Thinking of melodic death metal, what really still ties it to death metal? Sure, there are melodic death metal bands that, true to the name, sound like more melodic versions of death metal, but a lot of them just take a few elements of death metal, usually the harsher vocals, and create completely new structures for the instruments. I feel like that's pretty close to what's happening on Inexorum's Equinox Vigil. It's definitely not a folk metal album, because even if the melodies have a pagan folk vibe to them, they don't create pagan folk songs. It's not a black metal album, because it doesn't have (or barely has) black metal riffs. It's a blend of all of these, with death metal, with death metal's melodic counterpart, with the heavy metal that birthed death metal's melodic counterpart.

I know I'm making a bit too much of a big deal of this being a melodic black metal album. I could've just summarized my entire point in "This is a melodic black metal album. The black metal vocals are mixed with melodic riffs inspired by pagan folk" and had been done with it. I don't want it to seem like this album is a paradigm shift that will be remember for finally severing melodic black metal and black metal. But it's one of the best examples of that severing happening. Both in terms of the concept's execution and in terms of how great the album is. It does make sense that half of the duo, Carl Skildum, who handles vocals, guitars, and keys, is an Obsequiae alumni (live guitarist and occasional guitar guest), a band that is also a fantastic example of melodic black metal. And, by black metal standards, melodic or otherwise, the programmed drumming really doesn't feel disruptive, as I've only discovered after a couple of listens that there's no one performing them.

In the end, what this album should be remembered for is just how great the melodies within it are. It's 40 minutes chock full of great riffing that flows so organically. It's the kind of black metal that borders on the gorgeous.

Written on 22.06.2022 by
RaduP
Doesn't matter that much to me if you agree with me, as long as you checked the album out.
More reviews by RaduP ››