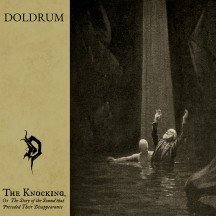 Then again, calling Doldrum simply a ‘black metal’ band is largely underselling them. This music is best described as progressive, avant-garde black metal, with some folk Americana, and horror synths thrown in for good measure. It mixes the experimental character of Ved Buens Ende, the primitive quirkiness of Master's Hammer, the malevolent theatricality of Cultes Des Ghoules, and the Clint Eastwood aura of Wayfarer into songs that are groovy, free-flowing, and harrowing all at the same time.

What we have here is a concept album and essentially a short play in five scenes, unravelled during the course of the five songs. The entire musical opus flows effortlessly, despite the off-kilter character of the compositions. The authenticity of the music and the pitch black ambience both create a very personal experience that is haunting, mysterious, and frightening.

As far as performances go, the vocals are very versatile and they take strange forms, as if different spirits possess the singer at different times. The bass lines are mischievous and meandering, and battle the deranged and twangy guitars riffs in a contest to decide which of the two instruments adds more hooks to the occult atmosphere. The drums are beating to ghostly rhythms, as if they jump in from different corners of a haunted room.

The mix is fantastic and organic; everything sounds loud and clear but there is also that gritty element that goes well with the darkly music and lyrics. The eeriness of the synths is accentuated when there is a need to do so, and the impact of dat pulsating bass is immense. In fact, I could spotlight any musical aspect of this splendid release, but, in my opinion, it is the bass that takes the album to a whole new level of awesomeness. Very fittingly, this trippy specimen of horror was recorded in Salem, a place famous for its witch trials and the related executions.

The Knocking, Or The Story Of The Sound That Preceded Their Disappearance reminded me a lot of one of my favourite black metal albums of all time, Cultes Des Ghoules’ Coven, Or Evil Ways Instead Of Love. You can see the resemblance just from the titles alone. But, unlike Coven’s whopping 100 minutes of runtime that can be overwhelming for some people (you, plebs, know nothing), The Knocking clocks in at just under 37 minutes, which means that it leaves you begging for more immediately after it’s finished. And we’re in luck, if my fortune-telling abilities serve me right; the outro of the closing track “The Disappearance”, is crafted in such a way that gives the impression that Doldrum have a sequel in the works…

In the meantime, this is one hell of a debut album.