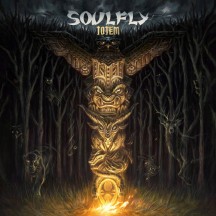 Chef Max is back in the kitchen once again, writing the next chapter in his cookbook, "Cuisine With Cavalera". Previous chapters include Sepultura steaks (take a slab of meat, tenderize it with a heavy-as-hell riff and blasting vocals, served nigh on raw), fusion cuisine with Roots ravioli, and Primitive paella (take the prior heavy riff, season it with extra groove and add in nu metal, with dashes of experimental instrumental additions to taste).

In recent years Max has been focusing on fast food, pumping out non-nutritious meals that imitate good cooking but aren't given the quality, care or attention to satiate a meatalhead's refined and cultured pallet (*cracks open beer can*), to the detriment of those sitting at his dining table (I can't believe it's not Beneath burgers).

So here on this installment of kitchen nightmares, we are served a plate of Totem tortillas. On first look, it appears like a solid meal and with no obvious flaws. The appetisers served up prior to the main course à la "Filth Upon Filth" (someone's eaten at KFC recently), "Scouring The Vile" and "Superstition" are a mouth watering taste of the dish about to come. The former is perhaps the most intense and engaging track by the band in years, while "Scouring The Vile" is not as spicy, but still leaves your mouth tingling.

It is when the band really push themselves rather than merely clock in and out that the album hits its high points. "Spirit Animal" is a nine-minute epic that is a melting pot of Max's past and present, high intensity with searing guitar work and rhythm shifts alongside non-traditional metal instrumental work.

Alas, it is when you carve open the album and have something to chew on that you realize that the album isn't as good as first thought. "The Damage Done" perhaps typifies this issue, sure, it has a great solo and a crushing stomp (with other tracks either having strong riffs or interesting elements that aren't fully utilized), but it feels underseasoned and a song with potential rather than potential realized.

That is perhaps the problem with latter-day Soulfly, there is little wrong with the album, but there is too little right with the album to really make you sit up and take notice. As intense as "Ancestors" or "Totem" are, neither leave an aftertaste you will savour; nor one that won't be washed away immediately by your next meal.

Assistant chef's Zyon on drums and Mike Leon on bass are competent if unremarkable in their roles. Leon is basically inaudible for much of the album, while Zyon does have some interesting parts on tracks like "Ecstasy Of Gold", but it seems like his contributions were pulled from the oven too early.

Alas, Totem still feels undercooked and underseasoned, with the meal not as filling as the band's prior serving Ritual. Had the band slow cooked the meal rather than rushed it out of the door, then it would likely be far better than it is in its current shape. While Gordon Ramsey might not be dissatisfied at the band at the dish served up to him, he's likely to be swearing under his breath as he takes apart his meal.

Written on 08.08.2022 by
omne metallum
Just because I don't care doesn't mean I'm not listening.
More reviews by omne metallum ››