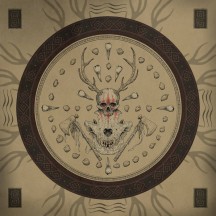 
01. The River Of Time Flows Through Me
02. As The Creek Flows Softly By
03. Sacandaga
04. Barefoot Ghost Dance On Blood Soaked Soil
05. Warm Wind Whispering Softly Through Hemlock At Dusk
06. Prying Open The Jaws Of Eternity


With all the focus on American Western black metal in recent years with the likes of Wayfarer, Untamed Land and Dark Watcher, there’s been a distinct lack of an indigenous voice in the discussion, until now.

Yes, if you’ve heard of BlackBraid before now, it’s probably because you’ve heard of the ‘Native American black metal project’. A one-man band (with the exception of drums, performed by producer Neil Schneider), BlackBraid is the vehicle of Sgah'gahsowáh, and it is a very striking vehicle. The thing is, from a purely musical (or if we’re being specific, instrumental, as the lyrics clearly draw from the indigenous experience) perspective, the project’s debut album doesn’t make its origins nakedly obvious; there are occasional non-metal instruments, particularly pipes, that are brought into play on tracks such as “Sacandaga”, but it’s not a record that is relying on gimmick. This is a serious, sharp-edged, blistering slab of melodic/atmospheric black metal, and it’s strong enough to go toe to toe with the competition.

Broken up by two 3-minute acoustic quasi-interludes that bear some degree of resemblance to Agalloch (particularly “Warm Wind Whispering Softly Through Hemlock At Dusk”, which would have slotted in naturally on Marrow Of The Spirit), the album is otherwise mostly geared towards sharp melodic-tinged tremolo, with most of the fluctuation in intensity carried by the drums shifting between blast beats and more measured patterns. These shifts in intensity do result in an album that flows very smoothly, culminating in some more grandstand moments that nicely cap off tracks, whether it’s the lead guitar melody during the bridge of opener “The River Of Time Flows Through Me” or the Medieval-sounding midsection of “Barefoot Ghost Dance On Blood Soaked Soil”.

Still, BlackBraid manage to make even more single-minded approaches work; a contender for the album’s best song, “Sacandaga” barely takes a moment to pause throughout its near-7-minute runtime, Schneider blasting and Sgah'gahsowáh tremoloing along relentlessly to create a storm of melodic blackened aggression with only those aforementioned pipes offering any notable levity. As overbearing as barrages of blasts can be, the riffs are good enough and the tone evocative enough that this song doesn’t lose steam or become draining before it reaches its conclusion. At the other end of the spectrum, 10-minute closer “Prying Open The Jaws Of Eternity” rarely opts for full-throttle rampaging, spending substantial portions of its runtime in slower, doomier waters, with the result again capturing the essence of the material on Marrow Of The Spirit.

Whenever a project marketed with some form of gimmick comes along, it becomes prone to more extreme reactions in either direction than it may have otherwise received. Is BlackBraid a revelatory record? In my eyes, it’s a bit too conventional and lacking in range to be so; the components of the album are very solid, and its songs definitely make an impact, but as a complete package I’m not as taken with it as I am with Wayfarer’s last couple of albums, for comparison.

Nevertheless, this is merely the debut album, and there’s already some very strong material to be found here, particularly on the two songs placed in the middle of the record, “Sacandaga” and “Barefoot Ghost Dance On Blood Soaked Soil”. Additionally, the production brings an ideal level of rawness to the music, one that really heightens the impact of these compositions by niftily balancing bite and clarity. It took Wayfarer and Untamed Land an album or two to really hit their groove, and if the same is the case for BlackBraid, I’m very excited to see what they manage to cook up next.

Written on 30.08.2022 by
musclassia
Hey chief let's talk why not
More reviews by musclassia ››