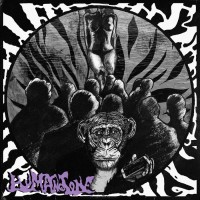 
Humanotone is an extraordinary solo project by the Chilean-born Jorge Cisternas Monsalves. Now, when I say a solo project, I really mean a solo project, as Jorge wrote the music himself, played all the instruments himself and even designed the artwork himself. An amazing feat that shows us how much of a talent this guy truly is.

Now what's genuinely interesting with Humanotone is just how difficult it is to simply pinpoint a specific genre for the band to come under. There are sure some obvious influences here such as the fuzzy guitar tone and catchy riff style, which has that traditional stoner metal sound and is easy on the ears. The tempo is fixated on a mid-to-slow tempo range, and with the heavy bass this clearly indicates an element of doom metal, which also shows in the lyrical content too (which is in Spanish by the way).

There are several lengthy tracks on the album, with the longest song being "Divergencia", clocking at over 10 minutes, but then you would expect that from an album that runs for over an hour in length. Now don't let that album length put you off; although most songs are structured within the styles I mentioned above, there are also moments in which he mixes things up a little by having some really tasty solos thrown in, with some rhythmic drumming, and slower melodies, all whilst maintaining that all-important heavy psychedelic sound. So the overall structure of the album is not exactly predictable; there is certainly a progressive touch to it, most notably on songs such as "La Verdad" and "Lusidez", where the tempo certainly does change. I guess it's fair to say the closest genre description for Humanotone would be progressive stoner metal, with other genres including doom metal and psychedelic rock from the softer sections, but I will leave that for the listener to decide.

The one thing you really can't help but notice is the lyrics being in Spanish; now I understand that this could easily cause a minor problem for some non-Spanish speakers including myself, but you have to understand that this musician is a Spanish speaker, so his lyrical preference is going to be in his mother tongue, as opposed to the universal language of English. I admit though that the first time I listened to this album, I was that in awe of the musical compositions and by how well crafted the instrumentation was that I hardly even noticed the lyrics were in Spanish at all! It was only until I had a proper listen and looked it up that I realised the lyrics were alien to me.

To sum it all up, Humanotone is another prime example of what one ambitious man with many musical talents can achieve. This self-titled debut is a masterful work of art indeed, but Jorge's work only got better with his next release A Flourishing Fall From A Grain Of Sand, and yet I have gut feeling this could only be the beginning of an impressive career.