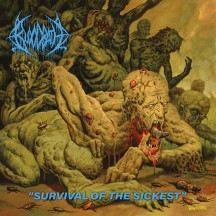 
For the first time ever, Bloodbath has three albums in a row with the same vocalist. I have some thoughts on that.

Me and Bloodbath go way back. "Eaten" was maybe not the first death metal song I ever heard, but it was the first I ever loved. That was before I even heard of Opeth or Hypocrisy or Katatonia or any of the other bands of the Bloodbath fellas. My classmates hated that song. Tough luck. Years pass and my metal expertise grows, but Bloodbath still holds a special place. Not quite among the old school death metal bands of the 80s and 90s, while also predating and maybe even spawning the OSDM revival. Bottom line is, Bloodbath is not just a death metal band, they always felt very specific. And it is that specificity that made me have certain expectations about what Bloodbath should be. Some of it is due to the mystique that their early days emanated, and some of it is just me being entitled.

What I mean is that Bloodbath started out as a tribute to the OSDM days made by people in bands that were pretty tangential to the sound. Edge Of Sanity, Katatonia, Opeth, each had death metal as a significant component of their sound (at least back in 1998) though it was one that was taken in very ambitious directions, whether progressive or doomy. It was the side-project supreme. It even had a bit of a parody feeling, taking the buzzing chainsaw tone to its logical extreme while not compromising the love and admirations these lads had for the Swedeath sound. That started to change soon enough. The tongue-in-cheek-ness became less apparent. And then there were lineup changes. Mikael Åkerfeldt was briefly replaced by Hypocrisy's Peter Tägtgren before coming back for another album. Dan Swanö left permanently. More Katatonia and Opeth alumni joined in the form of Axe and Sodomizer. And once Paradise Lost's Old Nick joined, suddenly the lineup changes were the most interesting thing about Bloodbath. Becoming a Bloodbath vocalist suddenly had such power that it changed Paradise Lost's trajectory towards their deathiest album in decades.

2014's Grand Morbid Funeral was the new Bloodbath album for me. Old Nick had such a different tone compared to Åkerfeldt and Tägtgren that it made it interesting to hear him purely based on that contrast. So when 2018's The Arrow Of Satan Is Drawn rolled around, Old Nick was still in charge. Ok, no new vocalist, but that's ok, they had 2 albums and 2 EPs with Åkerfeldt. At least there's a new guitarist with Craft's Joakim Karlsson. But here's the thing. It wasn't a legacy Bloodbath album I could explore, for which I could experience the tongue-in-cheek Swedeath love, nor was it a novel new lineup that would shift things up. It was around the same time where I literally had a dream that Bloodbath would henceforth have a new vocalist for each new album. And now freshly revisiting that album, I had no sense of familiarity with any of its songs, the way I do with every other album. Not to mention how until Old Nick's introduction, Bloodbath performed live less than ten times. They performed more than ten times in the year that he was introduced. Chances are, if you saw any incarnation of Bloodbath live, it was this one. Suddenly, Bloodbath lost some of that mystique.

Which brings us to Survival Of The Sickest. I honestly expected that all my contextualization would take less than three paragraphs, but here we are. Bloodbath are pretty comfortable. They're gonna tour this one extensively. They're gonna keep Old Nick as a vocalist. But it makes sense. It is no longer a fun side-project. It is one of the most beloved bands out there. And lineup changes making Bloodbath interesting is just an impression of mine that I'm solely to blame for. Otherwise I'd probably just wish for Åkerfeldt's return instead of a rotating cast of vocalists. In truth, each Bloodbath has had a different lineup, as this one sports Lik's Tomas Åkvik, who previously was a live guitarist, joining the studio too. But then, you may notice another point of contention for me. Lik is an honest-to-God death metal band, compared to the mere tangentiality of the other members' main bands.

So the only way for me and you to properly enjoy Survival Of The Sickest is to do away with this self-created Bloodbath mystique. It's not a fun side project with a tongue-in-cheek touch from folks tangential to death metal. It's Bloodbath. It's not that once-in-a-lifetime live band. It's Bloodbath. It's not a rotating cast of members. It's Bloodbath. None of that matters for how Survival Of The Sickest sounds like. Which is probably the entire reason why anybody would be interested in reading this review or listening to the actual goddamn album. The sound. And, well, it sounds pretty awesome. Compared to the more non-descript sound of The Arrow Of Satan Is Drawn, Survival Of The Sickest had plenty more moments that got me roused. Some of that credit does go to having a more standard death metal guitarist in the ranks, someone who you could say has more of an insider look on how death metal currently operates, and also some credit to having some interesting guest spots.

Seems like Bloodbath found ways to completely null my lineup standardization complaint by having the most extensive guest vocal roster of any Bloodbath album: Napalm Death's Barney Greenway on "Putrefying Corpse"; Gorguts' Luc Lemay on "Carved" and "Born Infernal"; and Morgoth's Marc Grewe on "To Die". Though the guest spots are a pretty minimal amount of vocals relative to Old Nick's, they serve as a pretty good palette expander, from Greenway's punk energy to Lemay's city-levelling lows. However, I do have to admit that I went a couple of listens without paying much mind to these guest spots, so it's really not just them that make Survival Of The Sickest that engaging for me. It seems like songwriting-wise, the band just hit it better than they did on the last one.

Survival Of The Sickest is far from a revelation. Not tongue-in-cheek enough to be fun, not innovative enough to be curious. It's sticking pretty close to the standard. But I've already given credit to the new guitarist, but some of the band's doomiest cuts come in the form of "To Die" (sporting the best solo on the record) and especially closer "No God Before Me". The latter especially quickly became one of my favorite Old Nick era songs mostly due to its infectious chants. All of it is old school as old school goes, but it's moments like those that seem to look a bit past that that make me want to return to Survival Of The Sickest. Thankfully, the band always sounds in top form in the album's vast majority of straight-forward moments.

Now, why the hell did they feel the need to put the album's name in quotes on the cover art?

Written on 06.09.2022 by
RaduP
Doesn't matter that much to me if you agree with me, as long as you checked the album out.
More reviews by RaduP ››