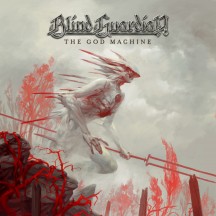 
Helloween made all kinds of waves last year with their jubilant trip down memory lane; not one to be outdone, Blind Guardian have swiftly popped up to remind everyone why they both were and still are the cream of the crop in power metal.

It’s funny how one can find natural parallels in seemingly unrelated events. Helloween 2021 was the first time that Kai Hansen had appeared on a Helloween record since the band’s late 80s heyday, and the album reflected this by featuring several songs very reminiscent of those classic Keeper Of The Seven Keys albums. Blind Guardian did release some worthy material in the 80s, but I think most would agree that it was the 90s when they fully peaked, unleashing a slew of all-time classics that showed their epic, thrashy, anthemic approach to be pretty much unrivalled within the power metal genre. Some aspects of that signature 90s style, particularly the thrashiness, have faded in prominence across the albums released by the Germans since the turn of the millennium, but after 2019’s symphonic detour, Legacy Of The Dark Lands, Blind Guardian’s next ‘typical’ album, The God Machine, sees them rolling back the years in style.

One of the first things that is really striking when taking in The God Machine is how relatively compact it is for the group. Since Nightfall In Middle-Earth, three of their four subsequent full-lengths have been over an hour in length and featured at least one epic exceeding 9 minutes; funnily enough, the one exception, A Twist In The Myth, is almost exactly as long as The God Machine. Hansi Kürsch has acknowledged that this shift in approach away from the complexity of their recent output was conscious, and as much as I’ve really enjoyed Blind Guardian’s ventures into the grandiose (“And Then There Was Silence” is never going to be dethroned as their finest song, in my eyes), it’s quite exciting to hear Kürsch and company biting hard after such a long time.

The other thing that is striking is, as already alluded to, the intensity of several songs on this album, particularly early on. The opening double-header of “Deliver Us From Evil” and “Damnation” have a full-pelt pounding intensity to them that has only appeared in brief moments across the past 20 years, and Blind Guardian haven’t lost their touch, as “Deliver Us From Evil” in particular has all the guitar shredding, choral bombast and relentless power that made their classic albums, well, classic. “Violent Shadows” is in a similar vein, its opening riff highlighting just how sharp Siepen and Olbrich’s guitars can sound when the group are going for the jugular.

The song that’s impressed me the most so far from the album also takes me back to the 90s, but not due to its intensity. “The Secret Of The American Gods” has a majestic tenderness to it that I can’t help but compare with “And The Story Ends”, the closing song from Imaginations From The Other Side. Blind Guardian have obviously written music in this ballpark since, but I don’t think they’ve replicated this specific type of emotionality, or at least not to this level. For me, “The Secret Of The American Gods” is a spectacular throwback, a perfect vehicle for Kürsch to highlight just what a brilliant vocalist he still is, and my personal highlight of The God Machine.

Everything I’ve been saying so far has been really complimentary, and there’s no huge ‘but’ waiting around the corner; although I think the strongest songs are placed earlier on the album, The God Machine is fairly consistently solid. “Architects Of Doom” and “Blood Of The Elves” offer more high-energy fare, “Let It Be No More”, while not nearly the band’s best soft track, is not a misstep, and “Destiny”, although not an obvious album closer when put against previous efforts such as “Wheel Of Time” or “Grand Parade”, is a nifty, twisty cut. The only moment on the album that really throws me in a less-than-positive way is the bizarrely 90s Guns N’ Roses-esque solo on “Let It Be No More”, which gives me whiplash every time it comes on, and goes as unnaturally as it arrives.

This is a very solid late-career album from a band that was on a very slight decline in the past decade or so; still, despite all this positivity and even with all its callbacks to their earlier material, it’s not a classic to that level in my eyes. The simple reason for that is the songs themselves just aren’t as great as the band’s best work. With the exception of “The Secret Of The American Gods” and perhaps “Deliver Us From Evil”, I don’t feel any of these songs have classic choruses or other memorable moments that will stay with listeners to the extent that a “Somewhere Far Beyond”, “Mirror Mirror” or even “Fly” does; to the contrary, I feel like “Life Beyond The Spheres” and “Architects Of Doom”, if anything, slightly peter out in those critical moments. Ultimately, this is an album where consistency is both a positive and a negative; The God Machine is consistently good throughout and offers a good mix of older and newer approaches, but by never rising too high above or far below a steady baseline of quality, it lacks the true killer songs or moments that are necessary to take it to the next level.

Overall, though, this is a really interesting next step by a legendary act that already had pretty much nothing left to prove, and certainly there’s some bands (*cough* Iron Maiden *cough*) that could perhaps benefit from following their lead in terms of going more direct. What’s more, Blind Guardian aren’t just falling back on nostalgia and hoping it will do the work for them; this is an album full of conviction and purpose, and even as it nods towards fondly remembered albums, it shows that Blind Guardian remain a real force to be reckoned with.

Written on 07.09.2022 by
musclassia
Hey chief let's talk why not
More reviews by musclassia ››