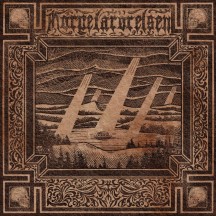 
This is the definition of a challenging listen (and review), but if you’ve got 80 minutes to spare, of which half are post-cum-avant-black metal passages, and half are acoustic folk ambiance and menacing drones with deeply disquieting Swedish Satanic suicide UFO paedophile sex cult evangelical preaching based on a true story, there’s only one thing to do: join the Korpela movement.

It is entirely necessary to understand the concept behind this album, and for all you non-Swedes out there who might enjoy this, some translation couldn’t hurt, so excuse the verbose dialogue excerpts, and feel free to skip over them in case you don’t care (although I really think you should). Korpelarörelsen, not unlike Vainaja, have based their music on the high-concept of Toivo Korpela’s Korpela movement (or Siikavaara sect), an infamous and honest-to-god Satanic apocalypse cult grown out of the conservative, abstinence-preaching Laestadian Christian denomination in Swedish Norrland. Having been banned from Finland due to their profane beliefs, they grew into a proper sect in northern Sweden in the 1930s, that after Korpela’s exit was taken over by Sigurd Siikavaara. After being institutionalised in a mental asylum for two months in 1935, he made the sect go off the rails in the most extreme counter-reaction to Laestadianism, preaching debauchery, intoxication, and pederasty, in ecstatic ritual preparation for the return of God upon which only the 666 chosen ones would be allowed a place in… hell. Jesus perkele... Society eventually caught on to this as the sect grew to 600 people, and 60 people were incarcerated for acts of varying inappropriateness, including sex rituals with minors.

The thud of a drum, and a massive burst of static distortion washes over you, a desolate cello growls as if from the depths of hell, and a ghostly voice starts preaching to you in Swedish:

“Something is not as it is supposed to be. Like a broken lyre, the feeling in my breast chimes falsely, and no matter how I twist and tune the strings, I hear no clear tone. Why am I so terrified, and why does doubt rise up from my heart? Like the wave of the sea that is driven by the winds, thrown hither and dither, I am seeking Your answer. Everything I have done, everything I have seen, everything I have heard, is for naught. All of these sacrifices, were they not Your intention? Consistently, I am meeting the spite and scorn of the elders when I proclaim Your word, but the people thirst for Your word, and You speak through me. The youth are diligently listening and await for You, Lord, to guide them through me. Your word is the truth, Your way is the pure, You are a doctrine and can carry us forth through times like these. Oh, great God, I am waking up. Lord, let your glory enlighten me. Let the light of the lamb guide me through the shed of ignorance.”

The cello continues to growl at you, as a menacing bass guitar throws ominous lines at you. A glitch, then the chime of an eldritch church bell calls you to the congregation. Another burst of static distortion washes over you, and the preacher returns. This time in a spoken-word growl:

“Have we not waited long enough now, Lord, for You to come? And always have we been prepared, but cannot bear to wait any amount of time for You to come without being granted clearer promises. And are we not now doing what the Lord desires when we gather also new faces to our meeting, that His coming is near now. And who are those elders who say that what I preach are against the word of the scripture, when we are two and yet more who have gathered here in Your name? Are they not only afraid that they will no longer get to rule, now that You have revealed to me Your thoughts? But how can it really be my responsibility that I now am to lead the chosen ones, so that they also may reach their home?”

Searing guitar drones rape your eardrums, a melody sounding as if made by a dying animal shortly appears, and the anguished whispers that follow soon intensify into perverse screams. The preacher then returns, in a voice so distorted you cannot make out what he is no longer saying. The ambience increases steadily in intensity, the screams turn from perverse into blood-chilling, it is no longer possible to make out the words of the demented preaching. At the point the music turns into something vaguely familiar, you have been listening to “Profas” (Prophase) for exactly 15 minutes. Then, an avant-thrash black metal tremolo, the blast beats, and a gruff, baritone blackened death singing enter to scream about how we have all been waiting, and after a few minutes more, the song devolves into a mantra chanting “till helvete” (to hell), and “Profas” is over.

“Metafas” (Metaphase) starts with the black metal, and ends with over eight minutes of screamed preaching and screeching drones, before a final black metal burst, which makes it easily the most accessible track. My favourite track, “Anafas” (Anaphase), has more of a folky feeling, with some truly creepy preaching ("He lets her inner eye be observed..."), reaching ever more sexual overtones, as the whispers quote the famous quote from Revelation 13:18 “it is the number of man, and it is 666”... It is just that in Swedish, the words for “six” and “sex” are both “sex”, and instead of saying “sexhundrasextiosex” (six hundred and sixty-six), he goes “sex, sex, sex”... You get the point. After about nine minutes, a sort of Wolves In The Throne Room riff enters to the sound of war drums, and it blasts off into a beautiful folk-tinged post-black melody that remains for ten more minutes (and it works so well) before breaking down in ecstatic screaming and glitchy production tricks. “Telofas” (Telophase) is even more challenging. Evil laughter, moaning children, various sex-implying noise, and following rumbling drones for 15 minutes, a short black metal assault, and then a true curveball as it ends in a swinging folk song cleanly sung in Finnish and a final black metal assault (also in Finnish).

It is so difficult to describe this album that I run out of space to say what I really think about it. Hell, it is such a fucked up beyond comprehension album I don't even know what to think, but it really got under my skin, and I am very impressed. One of the best albums I've heard this year, for sure. Against all odds, I find myself returning for the full stay, and it sounds more powerful each time. The production is roomy yet raw. The metal sections are badass, because the varied riffs and vocals really work and are of the kind where they’re moody and blistering enough to actually deserve to be churned out for nearly 10 minutes at times. The ambience mostly works, and is really well-made, slicing itself into the subconscious effortlessly, and never gets boring, always being dynamic.

It is a very ambitious work, bloated by intention, and the concept is as sick as it is sickening. Oh, and I can't for the life of me believe this is a debut album. Holy hell. So, we have four tracks averaging 20 minutes each, of which not even half is actually black metal, but uncanny ambience, folk drones, and Swedish preaching. This is truly avant-garde, not for the faint-hearted, and it is here that you have to ask yourself: Är Du Av Den Rätta Tron? (Are You Of The Right Faith?).

Big thanks to Nejde for recommending this album to me!