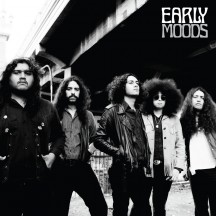 
The first thing that came to my mind when I listened to Early Moods was: “Fashion changes, but style endures”.

I know that a quote by Coco Chanel is one of the most unlikely opening lines you expect to read in a traditional doom metal album review, but I cannot find a better way to express my conviction that, despite all the evolution and the branching out of metal in the last 50+ years, the back-to-basics style will always be a winner, but only when done rightly and respectfully.

Early Moods have not reinvented the wheel. Au contraire, they are using a formula that has been done time and time again. They take the trad riffs and the groovy rhythms of bands like Black Sabbath, Pentagram, Witchfinder General, and Trouble, they spice it up with some Iron Maiden and Angel Witch melodies, they have a darker Sean Harris (Diamond Head) to sing on top, and the end product, leaning more to the doom metal side rather than the heavy metal one, is irresistible. You cannot go wrong if you go classic, provided that the style is not the only thing that is right on the money. The songs have to be worthy of that classic sound, too.

From the upbeat opener “Return To Salem’s Gate” to the epic closer “Funeral Macabre”, the band puts down quality riff after quality riff and gripping solo after gripping solo. The guitars are lightly fuzzy and the vocals have some reverb, so that the album showcases a little bit of a stoner-y character, but not too much, thankfully. The song “Early Moods” is a highlight, following the Black Sabbath paradigm of having the same band name, song title, and debut album title, but my personal favourite is “Damnation”; it sounds as if Alice In Chains are doing an alternate take of the main riff of Metallica’s “Sad But True”, and it has a magnificent solo.

Everything about this release is cool: the black and white band photo, the actual look of the band members (check out the vocalist’s afro), the ‘70s-style logo, but, most importantly, the music. I am a sucker for this type of doom metal, but I am also very difficult to convince because the best of this has already been done, in my opinion. This is why most bands that just go for the retro sound, without the songwriting chops and the musicianship to justify the throwback, end up in my trash bin. Early Moods’ debut will end up in my year-end list instead.