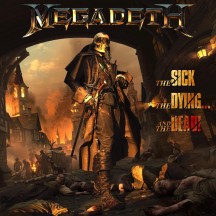 
Perhaps not an album to talk about in your local hospital.

The flames of youth may not burn as bright as they once did four decades ago, but everyone should know that if you play with fire you'll get burned; so it is that anyone who thought Megadeth's fire was ebbing away will find themselves singed. 16 albums in and with life throwing all sorts of curveballs the band's way in the six years since Dystopia, Megadeth return with The Sick, The Dying... And The Dead! (hereafter The Sick...) and show that adversity is only fuel for the band, coming back stronger again and again.

While the days of technical masterpieces that separated the band from the rest of the thrash scene ala Rust In Peace may be in the rear view mirror, Megadeth are by no means just another thrash band now. Thanks to the talents of Kiko and Dirk, the songs have a determination and rhythm that balances power with precision, not relying on sheer speed or cacophony to get the adrenaline pumping, but with purpose in each and every note.

Starting off where Dystopia left off, The Sick... kicks off with a four0track run that will remind you that Megadeth earnt that spot in the big 4. "Life In Hell" is a full throttle rager, while "Dogs Of Chernobyl" is a twisting and tantalising 6-minute track that keeps you hooked throughout. "Night Stalkers" veers close to cheesy gung ho militarism, but you can still headbang to it, though no doubt with a smirk on your face.

The album does become somewhat patchy once "Sacrifice" starts up; though it doesn't crash and burn by any means, it will have you wondering how the band couldn't come up with anything better than "Junkie" after six years. That said, "Soldier On!", "Celebutante" and "We'll Be Back" ensure listeners who hold on are rewarded for their perseverance. The only track I would say is bad is the cheese fest (maybe even as cheesy as "Crush 'Em") "Mission To Mars", which, unless your name is Elon Musk, I doubt you'll find much to enjoy from the track.

Having gone through cancer treatment, Mustaine shows no signs of being worse for wear; his trademark vocals and snarls are evident across the album, with the title track being a perfect way to reassure listeners he hasn't lost his knack behind the microphone or on the guitar.

The loss of David Ellefson may loom large over the album, but the decision to replace him with DiGiorgio is one that ensures that his controversial exit rather than his absence on the record is felt; at least DiGiorgio handles bass duties sublimely. With that said, however, the bass has been noticeably shifted deeper into the mix, perhaps as a way to keep the situation from overshadowing the music any more than it already has.

While The Sick... certainly has its spot amongst Megadeth's celebrated discography, being one of the band's strongest releases post-reformation, it is more owing to the weakness of its competitors than its own outright quality. A strong album for sure, but one that faces even stronger competition.

Written on 11.09.2022 by
omne metallum
Just because I don't care doesn't mean I'm not listening.
More reviews by omne metallum ››