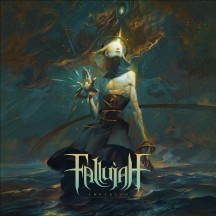 
I’m happy to forget Undying Light if you are, Fallujah, and from listening to Empyrean, I get the impression that you're on board with this approach.

I won’t give a blow-by-blow of my relationship with Fallujah up to this point; I already did that in my review of Undying Light, where I stated all the reasons I loved records such as The Flesh Prevails and Dreamless, and all the ways in which Undying Light took a dump on said reasons. I can’t say I had too much optimism that the trajectory of the band following that release would be one that aligned with my hopes for them, but perhaps the number of reactions similar to my own inspired the group to return to the drawing board. Something else that might have inspired a change of direction is some line-up changes; Antonio Palermo’s stint on vocals was brief, with Archaeologist’s Kyle Schaefer joining the band last year. Another departure, that of long-term bassist Rob Morey, saw tech-metal bass maestro Evan Brewer (ex-The Faceless, ex-Entheos) also hop on board. Whether it’s due to new personnel or reinvigoration of existing members can only be speculated over, but with Empyrean, Fallujah are back.

What does it mean for Fallujah to be back, though? Well, all the things I bemoaned the absence of on Undying Light - the atmospheric guitar leads, the frantic drumming, the intensity within the music - are very much present once again. It took less than 5 minutes (the length of opening track “The Bitter Taste Of Clarity”) to become aware of this, as this song featured all of that in healthy portions. A song such as “Radiant Ascension” has a healthy balance of initial tech-death chaotic extremity weighed against soaring euphoria, courtesy of a choral section replete with cleaner guitar tones and angelic female cleans from Tori Letzler (of course, there’s still ballistic drum rolls to ensure there’s not too much levity). It’s a nice return for such guest vocals, which previously lightened up the likes of “The Void Alone” from Dreamless; there’s also some male clean singing heard in fragments, such as briefly midway through “Eden’s Lament”.

It’s really such a pleasure to hear Fallujah smashing out quality songs in the mould of their mid-2010s material; “Embrace Oblivion” is a quintessential example of why this band was right at the pinnacle of the tech-death scene at that time, and why the drop-off to their last record was such as disappointment. A key feature that’s not been forgotten here is dynamic variety, with some really tasteful subdued atmospheric breaks in this song and others that allow the jawdropping technical riffs to be that much more impressive. Fallujah songs seem to have two sliding scales that fluctuate with only a partial connection: the one that decides how extreme the band are going to be, and the one that decides how much of the melodic atmospherics are going to be incorporated. It means you can have pure tech-death and gentle breaks, but also there’s plenty of time in which the instrumentation is genuinely intense, but the layering and expansiveness of the arrangements brings a euphoric touch to the blasting and attacking riffing, and it’s a combination that I am a sucker for.

So, Empyrean: big step up from Undying Light. But where does it stand next to those earlier albums I hold in such high esteem? Beyond the surface-level relief of it replicating that style, this new album does have its share of quality songs that take the promising core components and turn them into great enjoyable songs. I’ve already mentioned “Radiant Ascension” and “Embrace Oblivion”, but later in the album there’s the jagged, deathcore cut “Mindless Omnipotent Master”, which has plenty of groove within its stop-start semi-breakdowns. On the topic of groove, the opening to “Celestial Resonance” has the same kind of dizzying technical groove to it as the one that makes Between The Buried And Me’s “White Walls” such an all-time classic in prog-metal, and the persistently slow, poised nature of this song offers an intriguing new dimension after the rapidity of much of the preceding material. This is the one song on the album that I feel might genuinely rival the highlights of The Flesh Prevails; it’s a hard act to follow, but it’s one they follow impressively with the exquisite carnage and luscious solos of closing song “Artifacts”.

I’m not ready to say this is right at the level of The Flesh Prevails or Dreamless; it does sag a bit in the middle, and I’ve not yet found the 5* killer moments that have made songs such as “Starlit Path”, “Chemical Cave” or “The Void Alone” to be so unforgettable. However, I’m open to being proven wrong on that front, and I imagine this album will accumulate enough replays to test that claim. I approached Empyrean with low expectations, but it’s got me completely back on board the Fallujah hype train.

Written on 12.09.2022 by
musclassia
Hey chief let's talk why not
More reviews by musclassia ››