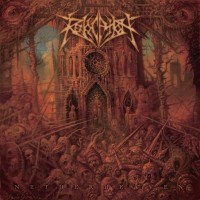 
Consistency can be a double edged sword. Sacrificing curious excitement for safe quality assurance. You probably don't need this review, or even to actually listen to this album, to know that the new Revocation is good. But it is this consistency that is likely the reason why Netherheaven is graced by a posthumous Trevor Strnad performance.

And a Corpsegrinder one. Thankfully that's not a posthumous one. Curious enough, both guest performances are on the same track, the very last one, and that track is my favorite of the bunch. That said, it's not like "Re‐Crucified" overshadows the rest of Netherheaven, but it is the only song that really feels like it makes the album unique within Revocation's grander discography. I'm not very well versed in Revocation's discography, just well versed enough to observe their sound and consistency, and it is probably that consistency itself that lead me to not really feel like I need to dive deeper. I already knew what I was gonna get. Good tech death/thrash. Easy.

Therefore, I don't think I can assess how Netherheaven fares against previous or classic albums. Since the band has been releasing albums since 2008, or even 2005 if you count the Cryptic Warning days, there's quite some back catalog, and it's great that the band still sounds this vital at this point. But ok ok, I think by now I hammered the consistency point enough. What makes Revocation good? For me it was always the seamless ways they blended technical thrash and death metal, to the point where it felt less like a blend of separate genres and more like a unitary sound. Sure, you can pinpoint sections that sound deathier and riffs that sound thrashier, but since a lot of blends of death and thrash go in a more traditional death thrash direction, it felt refreshing to hear someone find ways to make the two blend in a more modern setting.

It's not like Revocation are the only band to do this blend effectively. Bands like Ouroboros and Exmortus also come to mind, then there's Sylosis and The Black Dahlia Murder which also bring a bit of a core touch, plus the myriad of tech death bands with some slight thrash leanings like Gorod or Arsis. But for each of them it feels like they were balancing closer towards one or the other. Revocation sound perfectly balanced between the two. Death vocals, thrashy riffs, technical and progressive songwriting. And it is that songwriting that is more tuneful than flashy, avoiding the sterile tech death sounds that make people reluctant towards the genre.

Even though the band is now a trio, and thus guitar duties fall solely on David Davidson's shoulders, the sound feels completely realized both guitar-wise and overall. Especially around the midpoint of the record, the band finds way to balance their technical and pummeling sound with something darker and more atmospheric, giving the album some unexpected dynamics. So maybe that is the key to the kind of consistency that feels constantly rewarding: balance. The band doesn't tip the scales too much into either the thrashy, deathy, or technical directions, instead only shifting the balance to serve the songs.

Written on 15.09.2022 by
RaduP
Doesn't matter that much to me if you agree with me, as long as you checked the album out.
More reviews by RaduP ››