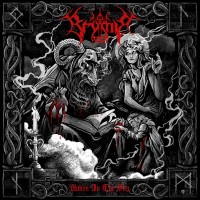 
Brymir continue to sound like four different bands at once. All superb.

Sure, at least two or three of those bands are Ensiferum, but that's to be expected when the band started out with an initial name taken from one of their songs. But Brymir's large range of sound and appeal is something that they're constantly working towards making their own. Though we have them here as "extreme folk metal", that's not selling the entire sound that Brymir take on. Even the bands whose influence they wear most clearly on their sleeves, like the aforementioned Ensiferum and Wintersun, as well as Kalmah and Children Of Bodom, weren't completely steam-lined into one genre, so it's only natural that Brymir would follow suit. Then you have guitarist Joona Björkroth joining Battle Beast, which enhanced the power metal side of the band, especially here.

You can already tell by the namedropped bands that Brymir merge the extreme with the melodious. Extreme folk metal existing alongside extreme power existing alongside melodic death metal, all having their epic and symphonic aspect enhanced. But sometimes the folk metal feels more like pagan folk metal. And sometimes the power metal feels not as extreme, and sometimes the symphonic aspect borders on some Dimmu Borgir sympho black and even some Summoning-core atmospheric black. And then you have a Dark Funeral cover to end things off and announce that black metal will have a slightly bigger share of Brymir's sound, which I hope will be the case rather than a one-off thing. I mean, Dark Funeral is neither the worst not the best black metal band to cover, but Brymir also do include some pretty neat blackened sections throughout Voices In The Sky.

Thus, chances are you probably like at least one of those four bands that are all Brymir.

Written on 15.09.2022 by
RaduP
Doesn't matter that much to me if you agree with me, as long as you checked the album out.
More reviews by RaduP ››