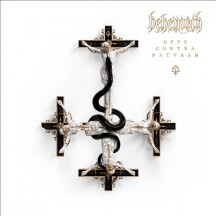 
With an album title that means ‘work against nature’, you may have expected Behemoth to create a work more contrary to their own nature.

Moving into the highest echelons of death metal with their thunderous 00s breakthrough albums, Behemoth celebrated Nergal’s recovery from leukemia by releasing The Satanist, an album that found near-universal adulation in the mainstream metal press, taking Behemoth to almost unparalleled levels of recognition for an extreme metal band and placing in numerous end-of-decade top 10 album lists (yet failing to get nominated in the 2014 Metal Storm Awards, if ever there was cast-iron evidence of our collective indifference to mainstream opinion on this site). Since then, the Polish juggernaut’s star has shined less brightly for some, with the further tempered and more grandeur-oriented I Loved You At Your Darkest and the wild mis-step that was their cover of The Cure’s “The Forest”, and as such Opvs Contra Natvram is perhaps the band’s least hyped record in decades. Now that it’s here, I feel it’s safe to say that it’s… fine?

One thing that stands out on first listen is that this album represents a jump up from ILYAYD in terms of intensity; it’s not nearly as full-force as albums such as Demigod and Evangelion, but it’s perhaps their most aggressive record since then. A dark atmospheric introductory track (“Post-God Nirvana”) is quickly followed up by a song that is short and to the point; in just over 2 minutes, “Malaria Vvlgata” (perhaps the most unfortunate casualty of Nergal’s no-‘u’ policy) sees Behemoth fly by in a way of tremolo, blasts and frenetic soloing, with Inferno demonstrating his explosive talents to the fullest. It’s a fairly exciting introduction to Opvs Contra Natvram, and songs such as “Neo-Spartacvs” and “Disinheritance” offer more in this vein.

Yet at the same time, it’s not a full-blooded onslaught of a record. “Off To War!” and “Once Upon A Pale Horse” have their explosive moments, but also spend plenty of time in more mid-tempo territory, while “Ov My Herculean Exile” only flirts with moments of real extremity. This is a blackened death album that puts a decent amount of emphasis on the blackened part of the equation, and that black metal takes form more as an ominous, ritualistic beast than a savage monster. On top of that, some of those more symphonic and choral elements remain, such as with the chanting in “The Deathless Sun”, the grandiose climax of “Thy Becoming Eternal” and the plodding majesty of “Versvs Christvs”, a song that follows in the footsteps of “Lucifer” and “O Father O Sun O Satan!” in ending Opvs Contra Natvram with a slow grandstand finish.

The end result of this is positive, for the most part. “The Deathless Sun”, while perhaps cheesy with its chorus, is dark, exciting and ominous, “Disinheritance” offers Inferno opportunities to shine, particularly in the extended intro while he pounds away on various toms, and “Off To War!” finds a decent balance between punkiness, atmosphere and extremity. At the end of the record, “Thy Becoming Eternal” represents perhaps the best of Behemoth on Opvs Contra Natvram, nicely bleeding a frenetic first half into a richly atmospheric finale, while “Versvs Christus” finishes the album with some style, even if it’s not comparable in impact to the two songs I compared it with above.

At the same time, I can’t say I’m overly enthused by Opvs Contra Natvram. Perhaps it’s because my interest in the band has declined a fair amount in the past decade, or perhaps it’s a reflection of the contents of the album, but I can’t say there’s a song here, except perhaps “Thy Becoming Eternal”, that really lives up to the legacy of their strongest songs from the Demigod-thru-Satanist period. At the other end of the spectrum, “Once Upon A Pale Horse” is a bit of a plodder, while “Ov My Herculean Exile” and “Neo-Spartacvs” represent fairly middle-of-the-road renditions of their respective styles. The end result is an album that flies by in a swirl of blasts and darkness, without quite landing the blows necessary to linger once it’s over.

The components that have made Behemoth such a force are here, between Nergal’s signature howls and Inferno’s overwhelming drums, and I enjoy the blackened tonality that feels increasingly prevalent in their guitars, so all the ingredients are here, and the output is not to be sniffed at. However, it’s also not something to rejuvenate opinions on the band, and the underlying quality isn’t quite there to compel me to return to it.

Written on 18.09.2022 by
musclassia
Hey chief let's talk why not
More reviews by musclassia ››