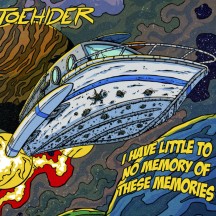 
01. The Hoarder [Bandcamp bonus]
02. I Have Little To No Memory of These Memories


Is there a point at which ‘including a diverse range of styles’ turns into ‘spreading oneself too thin’? If there is, an album covering 50 years of prog rock/metal has as much chance as any of finding it.

Some users here might be familiar with Toehider, the one-man prog band that has been plugging along steadily now for over a decade. More may be familiar with said one man, Mike Mills, courtesy of his appearances on the Ayreon records The Theory Of Everything and The Source. For those spilling over from Ayreon to check out Mills’ main band, new album I Have Little To No Memory Of These Memories may not appear all that different from his other efforts at first glance, with a peculiar album title and artwork once more from Andrew Saltmarsh. Look closer, though, and this is a unique adventure.

Clocking in at 47 minutes and 47 seconds, I Have Little... is Mills' first attempt at a one-song album (although the Bandcamp page lists a second song, the altogether briefer “The Hoarder”, as the album’s opening track). Taking 3 years to create, the song-album represents, as already intimated, a journey through 5 decades of progressive rock and metal styles, telling a journey about memory and forgetting featuring humans, birds and aliens in outer space. Furthermore, the song has distinct endings on the CD and vinyl versions. From all of that information, it’s clear that this is an extravagant and somewhat wacky venture.

Press play, and one finds that the narrative starts at the beginning of those 50 years, with some Yes-style elaborate vocal harmonies, before immediately jumping forwards a few decades with some punchy djent-tinged riffing. From there, one moves through, and this is very much a non-exhaustive list, space rock, folk-prog, retro-prog rock, bombast reminiscent of Symphony X, grungy heavy rock, bright 80s radio rock, 80s movie soundtrack synths, punchy djent-tech, rock opera, and more. It’s a lot to take in, particularly as Mills typically jumps from one style to the next after 2-3 minutes each time. With each jump, the production adapts, as the guitar tone shapeshifts, the vocal approach modifies and everything starts afresh in the newest style.

On the whole, it’s relatively well executed. I was very impressed on the first listen of I Have Little To No Memory Of These Memories, and after several spins, I remain rather fond of the first quarter of it; some of the storytelling in the window between 5 and 10 minutes feels the most consistently tethered of that across the whole album, and the acoustic folk passage is a clear standout sequence for me. I also think Mills as a vocalist is a clear strength of the album, as his performance is powerful and the melodies he sings are reliably memorable.

At the same time, I think perhaps ambition has exceeded execution to some degree here. Although some segments slot naturally together (such as the passages mentioned in the previous paragraph, as well as the move from 80s style to 80s style around halfway through), quite a lot of the album feels a bit like an awkward radio mash-up of sounds that aren’t obviously connected. Still, the album in its current form makes sense as a single super-song rather than a series of smaller tracks, mainly because most of the passages haven’t been developed into functional standalone songs. That is one benefit of making multi-suite songs; there’s not the need to work out satisfying verse/chorus or other complete song structures for each movement. However, when it’s one snippet after another and the connections between them aren’t obvious, the end result does begin to feel a tad disjointed.

On top of this, as much as some sections work really nicely, others come across as slightly half-baked, such as the few minutes after the synth soundtrack segment, as well as much of the music before the big finale. Additionally, the slow, dirty heavy portion between 17 and 22 minutes is given enough time to grow and develop, but the end product is not the most satisfying, and is awkwardly contrasted by the high-energy poppier rock that comes immediately after.

The upshot of all of this is that, at 48 minutes, “I Have Little To No Memory Of These Memories” is an ambitious song filled with a number of solid ideas, and when first listened to, that ambition is easy to be impressed by, but with more exposure, it turns into a song that offers moments of whiplash, and requires trudging through several middling passages to reach the standout moments. That inconsistency, and the necessity to experience the album as a single complete package that is borne from the nature of its composition, means that I ultimately don’t find myself feeling as warmly towards it as I did on first impressions, and would be cautious in recommending it to others. However, if you have decade-spanning tastes for music within the prog-sphere, it could very well be right up your street.