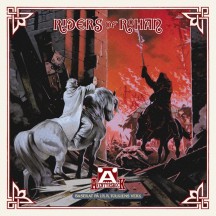 
The element of fantasy in heavy metal is a recurring one, whether it’s sword and sorcery, science fiction, or horror. Allegory, symbolism, and vivid imagery have all been part of the genre since metal took its first steps in the world of music. Riders Of Rohan are not just taking their first steps with their self-titled debut; they are riding with pride and their roars will be heard.

The mythology of J.R.R. Tolkien was there when the foundations of metal were laid (Led Zeppelin’s “Misty Mountain Hop”, “The Battle Of Evermore”, “Ramble On”), and it was also present when metal was actually born (Black Sabbath’s “The Wizzard”). Tolkien provided inspiration for one of the most iconic power metal albums ever (Blind Guardian’s Nightfall In Middle-Earth), and his influence went far beyond a single metal style, lending themes to many bands, most notably Summoning (more on this matter, over here). So, it comes as no surprise that Riders Of Rohan from Sweden have resorted to the English writer for their lyrics and imagery. What may come as a surprise is how greatly their music fits these fantasy themes.

If we are to believe the logo on the cover, said music is adventure rock or ‘Äventyrsrock’. Riders Of Rohan borrowed the font and the logo of Äventyrsspel, a Swedish RPG publisher from the ‘80s and ‘90s, who released Mutant, Drakar och Demoner, and Kult, among others, and also translated MERP (Middle-Earth Role Playing) in Swedish. The band used the art of Angus McBride for the cover, which had already adorned MERP’s Minas Tirith.

Now, I have no extensive knowledge on what ‘adventure rock’ really is, but Riders Of Rohan share a few similarities with the self-proclaimed originators of the genre, Hällas (also from Sweden). However, and while they do embrace the sound of ‘70s hard rock, proto-metal, doom, and folk, Riders Of Rohan are not as proggy and self-indulgent as Hällas; instead, they are mostly upbeat, to-the-point, and catchy. And the most striking thing is that they are catchy, even without following the verse-chorus-verse-chorus motif; in fact, a few songs lack what one would call a ‘chorus’. The compositions are short -more than half of them clock in at under three minutes- and ‘bloat’ is an unknown word for this album. There is a lot of variety displayed in the songwriting and you can hear influences ranging from KISS to Dead Moon, from Coven to Heavy Load, and from Danzig to Cirith Ungol.

Since Hällas is not exactly the modern day, retro-sounding band I would compare Riders Of Rohan with, the one that mostly comes to mind is Iron Griffin and, particularly their latest album, Storm Of Magic (although Riders Of Rohan is a lot less doomy). One of the reasons for this reference are the female vocals that fit this nostalgic sound like a glove, but Riders Of Rohan have gone the extra mile in the vocal department; they have both male and female singers that work very well together and there are times when they sound like The B-52s playing heavy rock as you can tell from the opener, “Muster The Rohirrim”. The album is short and easy on the ears in its entirety but, if you want to sample some of the variety I mentioned earlier, make sure you drink some ale on “A Night At The Prancing Pony”, hear the dark “Whispers Of A Nameless Fear”, find your way through the punky “Fog On The Barrow Down”, and gallop gloriously next to the epic “Strider”. Whatever you do, don’t forget to check out “Black Rider”, which is the best cover of KISS’s “Black Diamond” I have ever heard, with appropriate, Tolkien-esque lyrics, of course.

I know that there are countless Tolkien-themed songs, albums, and band names that it has become kind of cliché, and the ‘70s revival obsession by modern Swedish bands is getting a bit off-putting too. I won’t lie; Riders Of Rohan’s debut full-length is a homage to all things Tolkien and a tribute to the ‘70s hard rock sound. But these Swedes do both better and more convincingly than anyone else I’ve heard in a long while.

“The road goes ever on and on, like a river running strong
It swept us there and back again, from the slopes of the Orodruin
When I was much too weak to stand, you carried me through the blackened lands
To the end of everything, and there’s still no place I would have rather been”