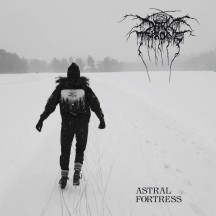 
So another year, meaning for us another Darkthrone album. This is not necessarily a bad thing I suppose, as this band have a fairly impressive and consistent discography to date, minus a few hiccups along the way. How does this latest release Astral Fortress fare amongst the others?

Now, the first first thing that really stands out for me is that bizarre-looking album cover that depicts a man walking across a frozen lake whilst wearing a hoodie showing their fifth full-length release, Panzerfaust, on the back. Now the question that springs to my mind is: why advertise merchandise from a previous album they released some 27 years ago? Well, only Fenriz and Nocturno Culto will know the answer to that, but it's most likely due to the fact that this album is strongly associated with the unholy four albums that kickstarted Darkthrone’s career in the early '90s.

Astral Fortress is this dark duo’s third release in four years, and is now album number 20 in their impressively long discography; this makes Darkthrone one of the longest-running black metal bands around. However, if you look closely at their discography, it's actually rather diverse, especially as you approach their later years. Although they have never strayed away from their typical raw production and traditional black metal roots, they have incorporated other elements and genres into their music over the years, genres that mainly include crust punk and blackened heavy metal. You will notice how far this band have stretched when comparing their 2021 release Eternal Hails...... to the days of their unholy trinity; some may say they have become softer in their later years, but it's important to know that they have developed and experimented their sound over a course of time and not necessarily made such a drastic change all at once.

Astral Fortress again very much follows in the path of Eternal Hails......, only this time you could say they have approached things in a slightly different manner. The sound and structure is slightly more on the epic side, and the riffs at times are like a blast from the past, as they contain the raw-sounding repetitiveness and hypnotic rhythms of old; the riffs for the most part focusing less on the blackened heavy metal approach of the predecessor and instead lean more towards traditional black metal.

The album kicks off with "Caravan Of Broken Ghosts", and being just shy of eight minutes in length, this track is by no means short; it begins with a soft acoustic passage, which I say is rather unusual for Darkthrone, but it doesn't take long before those classic hypnotic riffs of theirs get going, soon to be followed by those harsh raspy and sinister vocals, so before you know it, it's Darkthrone of old! Well, it's not exactly.

One thing worth taking note of is the occasional synth work taking place on tracks such as "Stalagmite Necklace"; this adds to a more dynamic atmospheric approach, and there are some moments in which the guitar tone is heavily distorted even by Darkthrone standards, which is especially noticeable on the track "The Sea Beneath The Seas Of The Sea", with its unusual opening and closing psychedelic guitar sound. The closing track "Eon 2" is also a real highlight, beginning with an upbeat funky rhythm until the usual tremolo riffing enters, but the style and rhythm then dramatically change several more times again towards the end, making this experimental track oddly satisfying.

And so yet another album for Darkthrone, the masters of black metal, and although this has been a long road for them, there's one thing that will never change for certain. Darkthrone will always remain pure to their raw and edgy sound; this album is stripped back to its bare core, allowing that organic production to shine.