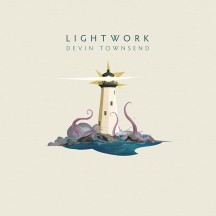 
The mad man is at it again.

One thing Devin Townsend can't be accused of is predictability, even when he states that he is going for a more "pop" direction on Lightwork; Devin still does things in his own unique way. One thing that Devin Townsend can be relied upon for, however, is quality; fans can rest assured that even though he is changing direction he ensures that it is done to his high standards.

Devin's decision to move into a self-labelled "pop" direction on Lightwork was something that had me excited because the last album he made with such a pivot towards pop was Epicloud, one of my favourite albums among his discography. Lightwork is a less brash and celebratory explosive power keg of pop as the aforementioned album, taking in softer and ethereal tones that are no less alluring in their charm.

While the opening pair of "Moonpeople" and "Lightworker" are enjoyable tracks, it isn't until "Equinox" that Lightwork really fits into its groove. From there fans are treated to a run of tracks that highlights Devin's knack of cracking the hardest of hearts ("Call Of the Void") alongside his progressive roots ("Dimensions"). This all leads to what are the two highlights of the album, a re-worked "Celestial Signals" (from Transcendence) and the acoustic "Vacation"; the former reshapes the track and adds a whole new sheen, while the latter strips Devin's usual cacophony of sound down to its basics, relying on the charm of its simplicity.

Devin Townsend maintains the strong musicianship throughout, with his trademark powerful voice front and center once more. While the technicality and expansiveness are usually the hook and highlight for many of his records, it is different on many of the tracks here, with the subtle touches perhaps adding the most. The keyboards on "Dimensions" and "Heartbreaker" add flourishes that catch and hold your ear. The return of Anneke Van Giersbergen is one that is welcomed and enjoyed in equal measure.

The only track that drops the ball is "Heavy Burden", a track that feels listless and uncertain of where it wants to go as a song, compared to the rest that have a direction of travel even as they meander on joyful detours. That said, compared to his other work, Lightwork's ceiling is lower than usual, though "Celestial Signals" and "Vacation" are the exception to this rule. The album is enjoyable, but I found myself not having as much fun as I usually do when comprehending the weirdness that is part and parcel of the Devin experience.

While Lightwork is an admirable and still enjoyable journey along the shores of shimmering pop, it lacks that spark that elevates a track from good to great. While still being a strong album, it pales when standing in the context of his rich and colourful discography.

Since Epicloud, each of Devin's albums has had an accompanying second disc of songs that are more experimental and, while not B-sides (certainly not in quality), don't necessarily fit the aesthetic of the main album they're tied with.

Nightwork follows this formula, being the more adventurous and unrestrained of the two discs. As a result, I actually prefer it to the main album, even though it does feel bloated at times.

The sense of unrestrained creativity is best summed up when comparing "Starchasm, PT.2" with "Carry Me Home", two tracks that sound like the Ghost and Sky Blue era were combined onto one disc.

This yin-yang relationship between the tracks makes for an interesting listen, though few songs naturally flow together; it keeps you on your feet and hanging on to each note.

"Precious Sardine" is perhaps the best synopsis of Nightwork, a highly catchy song that takes as many twists and turns as a Disney World roller coaster, seeing the progressive elements slowly come to the fore as the song winds it way round.

The main highlights for me have to be "Factions", which is the Strapping Young Lad worship you have been craving (with perhaps the best guitar solo to come out of this style of song), "Starchasm Pt.2", and "Sober".

The main downside to Nightwork is that as a result of the unrestrained nature of the tracks they often contain sections that merely pad out the running time rather than genuinely interest you and they run on for too long. "Children Of Dog" and "Precious Sardine" are the biggest culprits of this.

Written on 14.11.2022 by
omne metallum
Just because I don't care doesn't mean I'm not listening.
More reviews by omne metallum ››