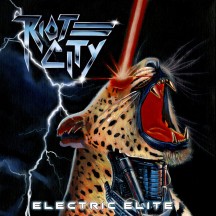 
It appears that Riot City have adopted the theme of laser-eyed, metalized animals for their album covers. Can’t complain really; they fit the music nicely.

Riot City is one the most promising bands belonging to the new wave of traditional heavy metal, having caused a certain, justified uproar in underground circles with their debut, Burn The Night. The cover art of that album was screaming for vengeance, but, more so than the hefty doses of Judas Priest, what was very much heard on it was the speed metal of Helloween’s Walls Of Jericho. Electric Elite preserves this sound, but also expands it a little.

The Canadians do make a point of not letting up with the ass-kicking opener, “Eye Of The Jaguar”, which is probably one of the most aggressive songs they have ever recorded. However, they attempt to explore slower and more epic tempos that they didn’t dare touch before, like they do on “Tyrant” and especially on the 10-minute closer, “Severed Ties”. The twin melodies are kept intact, and they appear in their most memorable form on “Beyond The Stars” and “Lucky Diamond”. However, my pick for best track on Electric Elite must be “Ghost Of Reality”, which has a strong ‘Crimson Glory meets early Queensrÿche’ feel.

Aside from the many positives, I cannot fail to mention that the vocalist goes overboard with the high-pitched style of singing. This was also a problem for me in their debut and it still is now, even though they have a new singer. Guitarist Cale Savy also handled vocal duties on Burn The Night, but just after its release Jordan Jacobs took his place behind the mic. In all fairness, the switch is not instantly noticeable because both have a similar style. But this style is difficult for me to digest. I am not in any way saying that Jacobs cannot sing, because he certainly can, but I feel that he is pushing it way too much and in a way that is, in my opinion, unnecessary. This is why I enjoy so much the instrumental middle part of the last track on this album, and also why I loved “The Hunter” on Burn The Night (because it had more music than vocals). Mind you, there is not a song as strong as “The Hunter” on Electric Elite, in my opinion.

So, if you can get past that, or if you actually enjoy these vocals and how high they are in the mix, you will certainly find this album to your liking. Instrumentally, and songwriting-wise, Electric Elite is a pretty good, old-school-brought-to-the-present, heavy metal album. Riot City are clearly talented and committed, and they definitely have a future in the scene. I just wish every line of lyrics wasn’t screamed so loudly so often.