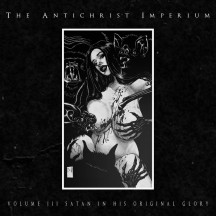 
Veterans such as Behemoth and Belphegor have made respectable entries into the blackened death metal oeuvre this year, but it’s a band whose reputation is arguably overshadowed by its members’ other projects that are really making a statement in the genre in 2022.

The Antichrist Imperium were founded by Matt Wilcock and David Leslie Gray, who have both either played in or are currently members of British death metal legends Akercocke and Australian maniacs The Berzerker; add to this The Berzerker’s Sam Bean and Akercocke’s Sam Loynes and you have extensive intertwining of these three groups. With Wilcock and Bean both also bandmates in Werewolves and Gray and Loynes likewise in Voices, this is a group of musicians with a clear appetite for collaboration with one another, and that evident musical synchrony comes through clearly on the intense yet unpredictable Volume III: Satan In His Original Glory.

The album really sets out its stall very early on by opening with its 2 longest songs, in which The Antichrist Imperium run through the variety of approaches they’ve brought to this record. When they’re at their most intense, the group rampage through sharp-edged riffs with frenzied percussion; however, there is some range, the tech-death leanings on “The Sweetest Juice” are replaced by a more ballistic, blasting blackened death attack on “Vilest Of Beasts”. Surrounding the ample extreme sections, however, there are dalliances with cleaner sounds that are consistent with those incorporated by the likes of Akercocke and Voices. Between a clean guitar break midway through “The Sweetest Juice”, a goth-tinged sung verse in “Vilest Of Beasts” and a ‘cleans on an extreme backdrop’ conclusion to the same track, The Antichrist Imperium make sure to not over-rely on pure venomous assault.

From this point on, most of what is featured in the following shorter tracks is a continuation of the templates established by this opening duo. Still, the specific styles in which certain sections take form are noteworthy; for example, “Exorcist Evisceration” goes even further in a goth rock direction in its middle period, in stark contrast to the frenetic nature of the bookending passages. The instrumental work is reliably top-tier; Gray’s drumwork is explosive, while Wilcock moves effortlessly between harder-hitting and more technical riffs, while also throwing in some lead guitar virtuosity. “Chapel Of The Crippled Seed” stands out courtesy of its opening Gothenburg-influenced guitar lead, while “Menage A Triumvirate” shoots out of the blocks with a striking ascending/descending tech-metal riff.

All these little pieces come together to highlight the main strength this album arguably has over the others I alluded to in the opening sentence: the memorability of the songs. In spite of how full-pelt the album can be, there is both subtle hookiness in the extreme riffs and diversity in the more melodic departures that help most of these tracks to stand out in one way or another. Perhaps the most memorable moment is saved for last, however, as the keyboards move out of the shadow and take a more central role in the climax of this track, some synthwave-style electronics serving as a prelude for an emphatic climax that combines a final flurry of blasts with a simple-yet-effective clean vocal motif.

I’m not necessarily fond of all the more melodic and softer sections on the record, and I feel like the techy parts featured in the likes of “The Sweetest Juice” and “Menage A Triumvirate” could have added more to the album if featured more extensively, but on the whole, this is a solid outing, and one well worth checking out for fans of the members’ other groups that have yet to discover The Antichrist Imperium.

Written on 14.11.2022 by
musclassia
Hey chief let's talk why not
More reviews by musclassia ››