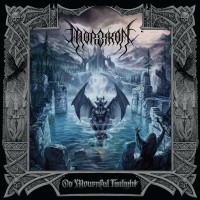 
So here's Ov Mournful Twilight, the debut album by newly formed melodic black metal band Morbikon, a band which features Municipal Waste's bassist Phil Hall and drummer Dave Witte, as well as Finntroll's vocalist Mathias “Vreth” Lillmåns. This band consists of quite a star-studded line-up, if I say so myself, but what does this exciting new prospect have in store for us on this debut, I wonder?

Starting with the cover art, it looks like a Finntroll-inspired cover, with the extravagant frame around the epic artwork at its centre. There's something about it which reminds me of the 90s meloblack scene, mainly due to the black and blue colour scheme, but there's also something truly sinister about it, which I really like.

What particular style has Morbikon presented us with here on Ov Mournful Twilight? Well, for starters, the band certainly play in an enthusiastic manner, and with all that enthusiasm comes a real sense of uncontrollable anger in how they approach things, with their ferociously melodic, almost traditional thrash-like riffing style, which they play at such a furious breakneck tempo. Each of the four band members brings something to the table from the powerful rhythmic drumming, to the wailing, shredding solos, to the exceedingly harsh, aggressive, black metal-styled shrieks and occasional death growls.

Clearly the 90s meloblack style has had a huge part to play in the overall influence and importance of this album, but you won't just hear meloblack on this record, oh no, it goes deeper than that. The groovy rhythm sections and catchy melodies almost give off a black'n'roll impression to me; there's also hints of thrash and blackened death, which makes this album all the more interesting.

The album is also very heavy on the guitar layering, where separate riff patterns work together all at once, with occasional solos overlapping those riffs. There is also synth work added for atmospheric good measure, which is mostly used at the beginning of most tracks for a tension building effect, and also at times used to break things up before continuing with their almighty onslaught. Production-wise, I do believe there is room for improvement, admittedly the structure can often sound a wee bit saturated for the listener, perhaps the production quality could be something to be improved on, but one thing is clear, this band has managed to give each track its own individual structure, and the band's character shines through on them all.

It feels as if the enjoyment levels must have been through the roof for this band when they came together in the studio to make this record. Together, they have produced an ideal album for those who aren't in the mood for getting into anything too serious or thought-provoking, but rather for those who just want to let yourself go a wee bit crazy. Let's face it, this music isn't exactly going to win any awards for its elegance, but it's practically perfect for bursting your blood vessels in the process of headbanging your way through a hellish mosh pit!