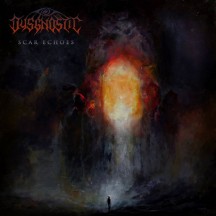 
If I had a nickel for every great dissonant death metal debut album in 2022 released by a band that was a reincarnation of another band that only released one full-length record before disbanding, I’d have two nickels. As the meme goes, it’s weird it happened twice.

It was all the way back in March that Radu hailed Aeviterne a worthy successor to Flourishing; although Aeviterne only contained two-thirds of Flourishing’s line-up, they ably lived up to the legacy of The Sum Of All Fossils’s Ulcerate-esque post-death. Dysgnostic go one better than Aeviterne in incorporating all 3 members of the final line-up of Defilementory, whose sole full-length release The Dismal Ascension arguably made fewer waves than The Sum Of All Fossils. Nevertheless, clearly Dysgnostic’s reputation preceded them, as their debut release Scar Echoes has already found its way onto the Transcending Obscurity roster. As always, Transcending Obscurity know what they’re doing, as this is a banger.

Now, those references to Aeviterne and Flourishing work well for an introduction to this review, but Scar Echoes is not expansive to the extent of those bands; following in the legacy of the likes of Gorguts, Dysgnostic alternate between dense, murky trudging and up-tempo aggression, as a dissonant fog lingers over the grim, antipathic quagmire that is this album. With some vile growls (just listen to the closing crawls of “Eternal Recurrence”), this is a sinister album, one that revels in putridity during some prolonged doomy trudges while having a capacity to burst out in fury in its reserve tank. The doominess is the focus of the opening namesake track; if it wasn’t so malevolent-sounding, one could almost say that “Dysgnostic” served to ease listeners into the work of Dysgnostic.

It is true that disso-death has been brought to life by a wide variety of bands by now, but like all the best metal genres, even if one isn’t reinventing the wheel, as long as that wheel is nice and round, it’s still very much appreciated. Dysgnostic may not have anything especially unique to offer, in contrast to Aeviterne (and by extension, Ulcerate)’s post- inclinations, but when they’re on song, they really emphasize the virtues of dissonant death metal. “Silvery Tongues” is a fine example of Dysgnostic on form; the first half is a frenetic assault of the senses, with plenty of contorted riffs, but around the halfway mark, a subtle melodic hookiness is brought into the equation, as the group slip into an emphatic and slowly evolving riff, simple yet effective, and working beautifully in tandem with the relentless percussion.

“Silvery Tongues” makes is instantly clear that Dysgnostic are on form, and is immediately followed by its biggest rival for the strongest track on Scar Echoes; “Beneath Abyssal Plains” explores the more atmospheric regions of Dysgnostic’s sound early on, before traversing a cacophonic mix of full-pelt intensity, and eventually some more measured, rolling grooves. Some of the greatest joy I get with this album is in the mid-tempo phases; as double bass drums roll incessantly beneath an ominous yet understated dissonant riff, the compulsion to stop whatever one is doing and just headbang lock and step with the groove is hard to resist.

There aren’t too many surprises to be encountered on Scar Echoes; “Nothing’s Embrace” is arguably the biggest detour, with some prolonged sections with cleaner tones. However, even if this is more of a one-off, there’s enough shifting between gears across the rest of the album to keep interest levels high, particularly with each component delivered so consummately. Scar Echoes is a fresh start for this trio of accomplished musicians, and they’ve made clear very early on that Dysgnostic mean serious business.

Written on 16.11.2022 by
musclassia
Hey chief let's talk why not
More reviews by musclassia ››