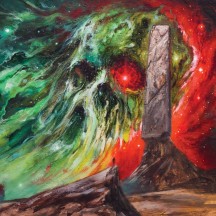 
In a genre as saturated as stoner metal, one needs to do something fairly special to really stand out. With The Sapient, I don’t think Eye Of Doom accomplish that; however, that doesn’t mean that this isn’t a worthwhile listen.

Reflecting the 2-year turnaround between records that many groups aspire towards, I started contributing to Clandestine Cuts in 2020, but it’s only been in 2022 that I’ve had the chance to review the debuts of bands that I’ve covered for that series. The latest to move from EP to full-length is Vancouver’s Eye Of Doom, who, even if I hadn’t given the game away in the opening of this review, you probably still would have guessed were a stoner doom band by name alone. When I covered Curse Of The Pharaoh back in Autumn 2020, I used Sleep as the main reference point for Eye Of Doom; they’ve clearly evolved in the intervening period between Curse Of The Pharaoh and The Sapient, as Sleep barely came to mind at all during playthroughs of this new album.

Having said that, Eye Of Doom haven’t thrown off the shackles of all influences and become trailblazers, as the sounds found within The Sapient bear resemblance to existing groups, but, much like with King Bastard’s debut earlier this year, there is a fair amount of variety to be heard in this release. The tracklist, excluding the brief introductory instrumental, can be roughly grouped into 2 camps. One of these comprises the two shorter tracks, “Dead Void” and “Return To Descension”. The former of these is very much in the occult-ish stoner doom vein of later Windhand, particular given the higher-pitched wavy vocal tone, and while the latter is a bit sharper-edged and livelier, it remains in a similar musical sphere.

The second camp includes the two-part self-titled song that bookends the record, both parts of which run over 10 minutes. The album’s title track, which is just shy of this barrier, serves as a bit of a bridge between the two camps; earlier on, it’s a very riff-oriented fuzzfest, but as it enters its second half, it becomes more expansive and jammy, with some lush meandering instrumental sections. It’s a very solid track, but it’s the two parts of “Eye Of Doom” that really help to make The Sapient a worthy listen for me. “Eye Of Doom, Pt. 1” shifts between heavy riffs, slick desert grooves and solo sections, but it’s the lush closing minutes of it that really get me on board. The song that the prolonged evocative solo and rousing accompanying instrumentation really brings to mind for me is the fantastic overlooked opening track from Rama’s Everything Is One, but in terms of more well-known comparators, fans of mid-era Mastodon, Elder and Humanotone should get some real joy out of this track.

The second part of “Eye Of Doom” goes about things a bit differently; some of the more mellow, atmospheric sentiments that were hinted at in moments prior to this song are really brought to the fore early on. Anyone who’s familiar with Different Layers Of Fear by Methadone Skies, particularly its similarly great closing track “Manos”, should feel right at home with the guitar tones and evolution of “Eye Of Doom, Pt. 2”, and while this isn’t quite the equal of “Manos”, the ebb and flow of “Eye Of Doom, Pt. 2” between its softer, fuzzier and outright crushing phases is thoroughly satisfying.

Overall, The Sapient is not a revelatory debut within this genre, but like King Bastard’s debut, there’s enough quality and variety on display here for Eye Of Doom to be able to demand some attention from genre fans. At the very least, the reliance on Sleep that I clearly heard in the debut has drastically diminished, and the array of sounds being brought into the mixing pot makes this a satisfying first proper outing for the trio.

Written on 18.11.2022 by
musclassia
Hey chief let's talk why not
More reviews by musclassia ››