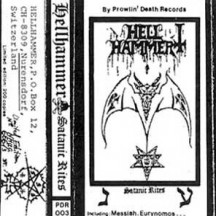 
The paradigm shift of metal's extremity. A tape in Switzerland.

It is quite mind-boggling that this came out in 1983. To put things into perspective, metal was in a very different spot back then. The New Wave Of British Heavy Metal was still in full force, cementing metal as a separate thing and more than just a harder version of rock music, but most of it could still be classified as just heavy metal. But the sprouts of extremity and diversity were already showing. Witchfinder General and Pagan Altar took Black Sabbath's formula and made doom. Venom took Motörhead's punk infused speed and made it blasphemous, baptizing the black metal genre to come. Mercyful Fate figured out that falsettos and the occult go hand in hand. Manilla Road and Manowar put a bit more muscle and bravado into it. Metal's cousin punk was going through its own hardcore punk explosion with acts like Bad Brains, Misfits, Black Flag, and Discharge already expanding the vocabulary of extreme punk. And thrash was already setting the stage with debuts by Slayer and Metallica. But none of these I could wholeheartedly call "extreme metal". That's where Hellhammer comes into play.

Formed in May 1982 near Zürich, Switzerland under the Hammerhead name, the band had already released two demos in early 1983 titled Death Fiend and Triumph Of Death while under the Tom G. Warrior (guitars / vocals), Bruce Day (drums), and Steve Warrior (bass) lineup, before replacing the latter with Martin E. Ain (R.I.P.). Note that the band often used pseudonyms like "Satanic Slaughter" or "Sleyed Necros" or "Denial Fiend", and even their more "normal name" pseudonyms weren't always their actual names, like Bruce Day actually being named Jörg Neubart. Nobody in the band actually had "Warrior" as a family name, but Tom and Martin are their actual given names. Still, not like Hellhammer invented pseudonyms, but very few people had pseudonyms as cool as "Satanic Slaughter" until Tom picked it. On the tail end of 1983, Hellhammer released a third demo. Satanic Rites.

Considering that half of the reason why I'm doing this review is for historic purposes, you'd think that I'd go ahead and pick either Death Fiend, which is the band's actual first record (and therefore arguably the first extreme metal record), or next year's Apocalyptic Raids EP, which is the band's only non-demo contemporary release, or even the Demon Entrails compilation, which would've given me the opportunity of covering all the demos at once. Well, Death Fiend and Triumph Of Death are pretty rough listens, even by 80s extreme metal standards. Though Mayhem fans already know the feeling of a band's first release being rough to near unlistenableness, there's a cool crusty bass and a very punkish tone that permeates both of those demos that do make them a lot more listenable than Pure Fucking Armageddon. And anyone who really gets into extreme metal demos from that era will find much much worse. That said, metal took a huge step in between 1983 and 1984, so anything after Satanic Rites wouldn't have the contextualization of extreme metal have the same ring to it. So picking the best compromise and what I'd like to think is the best Hellhammer release (and the one you should listen to right now) is Satanic Rites.

Contrary to popular belief, it is Tom not Martin who is playing bass on this release, even though Martin was already a member and does provide some backing vocals. That might explain why the crusty bass of the first two releases, and the only thing that I prefer about those two, is gone. Other than that, Satanic Rites finds the band in a position where the "enthusiasm exceeds actual talent and production budget" situation is tweaked a bit. The improvement is pretty huge in retrospect, or at least is when listening to the two (well, three) side by side in the Demon Entrails compilation, which might also be due to some material from Satanic Rites being re-recorded for that one.

The album opens up with some demonic processed vocals before plunging into thrashy riffs on "Messiah". You'll soon find that one of the best things about Hellhammer, aside from their influence and raw evil sound, is their ability to come up with compelling riffs to make up for their drawbacks. The enthusiasm itself is infectious, with the music having the sort of momentum that feels inches away from stumbling on its own feet, especially drum-wise. Tom's vocals are the staple of a very thrashy aggression that stands in stark contrast with the more melodic sounds present up until this point in metal, though some shrieks do feel very specifically 80s-ish. Though the Venom influence is clear as day, the metaphoric dust and rot here take the entire sound to a whole new level of violent noise. You could not, in good faith, call Hellhammer "rock 'n' roll music".

Perhaps as interesting about Hellhammer's story in the 80s and their music is how they were viewed retrospectively. And I may not be the best person to compile this, thus I invite people who were contemporary or who have read more interviews and memoirs than I did to join the conversation below. That said, contemporary critics were not very convinced, neither by them nor by the Celtic Frost that they turned into, even as To Mega Therion (which was a title originally slated for a planned first Hellhammer studio album) reached the peak of this proto-extreme metal sound that Hellhammer started. Celtic Frost veered from that sound, whether in a more avant-garde or more mainstream direction. For the longest time, this period was hated by its creator, along with a bit of a disdain for metal and metalheads in general but something did seem to change around the time that Celtic Frost was revived and released the magnum opus that is 2006's Monotheist. This eventually lead to the formation of Triptykon, a metal band that Tom still activates in. And in 2008, the aforementioned Demon Entrails gave new life to this era of Hellhammer. Even more, Tom started performing material from this era under the Triumph Of Death name, and put out a shelved single from this era.

I don't think people who heard this in 1983 and 1984 realized what a paradigm shift this would cause. But its influence is clearly visible in retrospect. Though a lot of it comes from it being seen as an early version of the even more influential Celtic Frost, one need only look at the tracks "Maniac" and "Eurynomos" before some bells start ringing, even the band name itself being taken by that one drummer that's in every other project. There's even bands whose entire shtick is sounding like Hellhammer. We call in black metal in retrospect because of how much black metal bands that came in the band's wake would pay tribute to it, but in a time when subgenre tags were used pretty interchangeably, it's hard to see Hellhammer as anything but a progenitor of extreme metal as a whole, whether black or death or grind or sludge, all have some sort of lineage to what some outcasts did in Switzerland in 1983.

This has been yours truly's 664th review. Two more until the devil's number.

Written on 19.11.2022 by
RaduP
Doesn't matter that much to me if you agree with me, as long as you checked the album out.
More reviews by RaduP ››