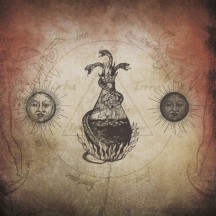 
While often it’s on albums 2 and beyond that a band truly finds their footing and their music is elevated a notch, witnessing the intrepid exploration of their very first steps can be as rewarding, in its own way, particularly if it’s a group that aren’t locked into one specific genre.

My most recent review was of the debut record of a band whose EP I covered for Clandestine Cuts in 2020. As circumstance would have it, a fortnight earlier than Eye Of Doom’s The Sapient, another group in this same category released their first full-length record. Murmur (ESP) (who also seem to go by Murmur Xatafi, which to be honest I feel is a more memorable name than just Murmur on its own) appeared in our June 2020 edition of Clandestine Cuts with their self-titled debut EP, a record that, while I didn’t love it, I appreciated for it managing to not fall obviously into any one particular genre. At the time I described it as a melodeath record, but even that felt like a sub-optimal description that didn’t take into account some of the prog, hardcore and trad-heavy influences that seeped into the EP. At the time of writing this review, Murmur (ESP) now describe themselves on Instagram as a post-black metal band, so clearly they are continuing to explore beyond their immediate stylistic confines.

Having listened to Pvtrefactio several times now, I can definitely agree with Murmur (ESP) that post-black metal is a fitting description for their current incarnation; this represents a clear evolution from what could be heard on Murmur, since that wasn’t a genre I found myself recognizing in that EP. It’s a stylistic transition that Murmur (ESP) have taken to fairly well; certainly, they’re confident enough to open this debut album with a 10-minute mammoth, “Death Of Thoth”. It’s a song that features the dynamic contrasts expected of post-metal, with louder, ominous bookending sections with a muted interlude sandwiched in between, augmented by sinister blackened tones. Some of the riffier nature of Murmur can be heard in passages within “Death Of Thoth”, but the focus is more on atmosphere here.

Atmosphere remains the focus on subsequent tracks, with “Leiyu” a slow burn that ratchets tension for several minutes in a prolonged semi-screamed/semi-spoken passage that finally releases the shackles for a brief yet frenetic assault. Still, Murmur (ESP) are capable of being more direct when necessary; the high-speed “Caelestis” initially feels like something of a bridge between Murmur and the more protracted material on Pvtrefactio, even if it subsequently explores quieter realms later on, the almost jazzy outro a far cry from the song’s early moments.

Given the extent of the shift between the self-titled EP and Pvtrefactio, this is a respectable first dive into this genre by Murmur (ESP). I wouldn’t say that it necessarily rivals the more accomplished bands in the genre, as the songs can drag a bit in places, and the quieter passages tend to be a tad indistinct. On the flip side, though, the more potent moments carry a fair amount of gravitas to them, whether it’s the sinister, crawling climax of “Sol Invictus” or the tense, drum-powered builds in closing track “Seven” (which aptly has a runtime of exactly seven minutes). “Seven” represents most of what is best about Pvtrefactio, in terms of how engaging each section is and how fluidly they flow into one another, so it will hopefully serve as an effective songwriting springboard for Murmur (ESP) to use going forward. That is, of course, if they remain in this genre rather than shifting their gaze elsewhere, but given the quality of what they’ve managed here, there’s plenty of reason to stay put, at least for now.

Written on 19.11.2022 by
musclassia
Hey chief let's talk why not
More reviews by musclassia ››