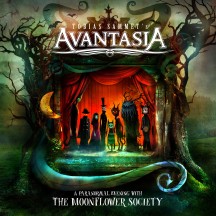 
Perhaps I’ve been scarred by Rob Zombie: I’ve come to expect that when the title of a band’s new album reaches 16 syllables, it suggests a diversion of creative resources from the music. I’ll always have more patience for Avantasia than most bands, but their ninth opera doesn’t totally dispel my prejudice.

A Paranormal Evening, as it will henceforth be abbreviated, displays a capacity for abrasion little explored by the Avantasia of albums past: the syrupy suites and snug AOR ballads that peaked on Ghostlights transform into speeding thrash attacks and raw metallic energy that even the Metal Opera duology often eschewed. Tobias Sammet has spent the three years since Moonglow beating his ploughshares back into swords, opting for a more aggressive writing style that seems consciously heavy metal in nature rather than the velvety pan-pop-rock blend his project has become known for. The album may be compared more closely to the Wicked Trilogy than the last few albums, typically less symphonic and less adorned, written more in a straightforward hard rock/heavy metal vein; to confirm the effect, Sascha Paeth’s guitar sound rawer and more overdriven than usual, Felix Bohnke pushes his drumming to Hephaestian power, and the production slashes away the sumptuous swaddling of the band’s best work.

Of course, the shift in sound is generally cosmetic: Avantasia will never leave behind the Magnum-inspired theatrical rock, the grandiloquent power balladry blown up from Bon Jovi, or the Helloween-style feel-good soft speed metal anthems. But “The Wicked Rule The Night” is quite possibly the heaviest song that Avantasia has ever recorded – a thrashy, wicked, wailing number that sounds appropriately like Primal Fear – and similarly inflamed speed pushes tracks like “Kill The Pain Away,” “Rhyme And Reason,” “I Tame The Storm,” and “The Moonflower Society” beyond their familiarly melodic concepts. Perhaps counterintiuitively, what contributes even more to this sense of heaviness is the synthesizer use. Obviously you can’t fuel a pop band like Avantasia without them, but staccato cyber-riffs take up much more real estate than usual here, sometimes bullying the guitars away altogether; their application to murky opener “Welcome To The Shadows,” for example, is drearily gothic and sets a curious tone to begin. And as much as you hear the conventional symphony synths, you’ll hear a more electronic sound, a somewhat unfamiliar texture that negates some of the smoothness of the melodies and conspires with the tinny guitar tones for a strikingly raptureless instrumental foreground.

In fact, A Paranormal Evening sounds rough and gritty, even unfinished, and that summarizes my overriding impression of the album. Multiple times throughout, I was surprised by the end of a song – I always expected more build, more variation, perhaps another bridge or a lengthier solo section or something. A Paranormal Evening sounds bereft of some key component. What that could be, I’m not sure, but the songwriting, for all its hooks, rarely rises above pleasantly hummable outside those select earworms, and the production lacks the warm embrace I’ve come to expect. The lengthy finisher, “Arabesque,” exemplifies this sense of incompleteness: the “epic Jørn Lande feature” is typically the highlight of any Avantasia album, but despite its interesting bagpipe usage and incorporation of Middle Eastern-inspired melodies, “Arabesque” feels more like a collection of unused choruses from earlier tracks set to sample chord progressions from the last album’s “The Raven Child.” I’m afraid that this will be consigned to the inoffensive yet forgettable half of the canon.

In spite of my disappointment with the overall presentation of A Paranormal Evening, a rough-cut Avantasia album is still an Avantasia album. Tobi can write some of the best hooks in metal: every single night you can see him up there in his workshop, tirelessly grinding away to make sure that the “flower” stays firmly lodged in “flower metal.” Moreover, as exemplified by basically every track on this album, he possesses a further necessary skill in being able to maneuver his featured friends smartly: the similarities to Primal Fear are evident in the Ralf Scheepers feature, the Magnum influences shine through everywhere and especially on Bob Catley’s track, and even Helloween’s Galactic Supreme Tengen Toppa Pumpkins United Mk. Excelsior Ultimate Formation sometimes finds itself outwritten when it comes to classic Kiske tracks. The impassioned ascension of “The Inmost Light” allows it to soar right into my heart as a new piece of angelic power metal to soothe the soul. Both of Floor Jansen’s stracks are emotionally gripping as well, and for further highlights I’d have to nominate “I Tame The Storm” or “The Moonflower Society.”

Really, most tracks would do – A Paranormal Evening is one of Avantasia’s most consistent albums, if you rank it in terms of memorable choruses and vocal performances, so I’ll undoubtedly continue to listen to it and come to love it with time, but it does unfortunately lack a lot of polish, and that fact will likely weigh down the assessments of most listeners.