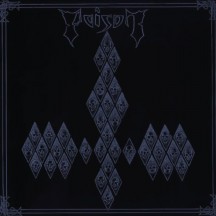 
In the melting pot of the 80s that would eventually birth death and black metal, genre lines were still a bit blurred. Everybody just wanted to outevil each other.

As a band forever damned to never escape being mentioned together with an American hair metal band (a pain that Phil Lynott and Gary Moore's first band is also familiar with), Poison (GER) have a very strong air of kvltness about them. Really obscure, never went past the demo phase, influential to some of the right people but not enough so that they're part of the canon, and also arriving at the right time in the 80s where they're lumped together with the emerging extremity of first wave of black metal and early death metal. Only active for about five years, and with all but one members not having any connection to any other band since. Kvlt as can be.

I personally found out about them through a recommendation by a similarly kvlt musician. Though I have since encountered them in specific circles, it's a bit tougher to put a mark on just how influential they were. Their first release, Sons Of Evil in 1984, is the sort of unlistenable cacophony of drunk teenagers who can't play instruments but want to play evil music, in a quality that makes the first two Hellhammer demos that I complained about previously sound pristine. It is a weird twist of fate that you'll still find plenty of primitive black metal albums trying to nail that exact sound. 1985's Bestial Death and 1986's Awakening Of The Dead were definite improvements over it, but there's a reason why 1987's Into The Abyss is the one that eventually got most of the recognition, and the one that is closest to being the band's proper full length.

I'm not precisely sure how different the 1987 and the 1993 versions of this album are. I know it was recorded in late 1986, and in 1987 they got fucked over by a contract forbidding them from signing to any label for an entire year while Roadrunner Records could decide to sign them in that time frame (hint: they didn't). Regardless, it's probably the remastered version that you and me would be listening to anyway, and as far as that version is concerned, the sound quality is just the right amount of primitive and rotted in a way that adds to the appeal, as opposed to their other recordings. Which is a lucky coincidence since Into The Abyss also contains the best songs that the band ever wrote.

Some versions of these songs have appeared on previous recordings, for example "Yog-Sothoth" also appeared in an infantile form on Awakening Of The Dead. But the difference is noticeable, not just in sound quality. Poison (GER) no longer sound like sloppy teenagers, and even if the drum performance is the only one that can border on sloppy. For an album whose runtime is in full-length territories but has only four tracks, the band manages to play into longer form thrash metal by alternating paces and introducing melodic riffage that acts as a sort of motif through the songs, infusing them with just enough dynamism and repetition to make the longer runtimes work.

And not to mislead anyone, this is definitely a thrash metal record first and foremost. You can clearly tell the environment that this was made in was one that was already infested with this thrash bordering on the extreme, and given how their compatriots already made albums like Destruction's Sentence Of Death, Sodom's In The Sign Of Evil, or Necronomicon's self-titled, there was already a tradition of German thrash pushing the boundaries towards what would become death and black. But when you combine that with the groovy and doomy moments that alternate the more pummeling ones, and the absolutely evil vocals that are the most clear black metal element that go really well with the gloomy riffing, you have metal taking another step in its evolution.

This has been yours truly's 665th review. One more until the devil's number.

Written on 22.11.2022 by
RaduP
Doesn't matter that much to me if you agree with me, as long as you checked the album out.
More reviews by RaduP ››