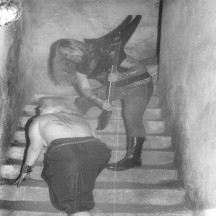 I have been building up to my 666th review for some time, and I must admit that figuring out what album ought to be worthy of that occasion was a hard one. As of right now, I'm the second ever MS writer to reach such a number, so that only makes the occasion even more of a high standard. What album is evil enough to warrant that number? I could've went for the most famous metal instance of the number, or for an album literally named "666". However I couldn't really find anything that really really suited the occasion. Until I found 666, and I knew I couldn't review this album for any other occasion. It had to be this.

Now, I know I am sort of bending the rules here since we don't technically allow bands which only have demos. But since 666 is in between an early version of Törr and a side-project of the band, and this demo already appeared on Törr's page prior to me adding a separate profile just to make sure that "666" appeared as the tagged artist, I don't feel especially guilty. So the question arises as to why I chose to cover this one obscure Czech demo that I'm honestly not even sure if I'd call good. Other than the band name obviously. And the answer is that there's something quite unique and charming about it.

First up, this thing supposedly came out in 1983. You can make the claim that this is a mystification, since this is so obscure and undocumented, because otherwise this would mean that the Czechs got in on making blackened heavy metal at the same time that Hellhammer did. Törr was also supposedly active as Torr from as far back as 1977, but it would only be until 1987 that the Witchhammer demo would be released. Several demos from the 1987-1990 era would be included in the Inkubatörr box set from 2006, but more relevant for our review, it would also include the Nekrofilie demo from the 666 side project. So if you wanna make the case that it was recorded later but they claimed it was 1983 for kvlt points, go right ahead, but I'm gonna follow the official story for now. I wanna believe that a bunch of drunk Czechs made psychedelic black metal 25 years before Oranssi Pazuzu was even a thing.

Even without taking Törr into account, since they're kinda the same band anyway, there was something very specific about the Czech black metal scene from the late 80s early 90s, especially with acts like Root and Master's Hammer, which is something that I can only describe as "goofy", or "evil in a cartoonish way". And likely all of it can be traced to this weird demo. I mean, just look at that cover art! There's no way a logical and sober person came up with that idea. The production is pretty low fidelity, but the thing is by no means unlistenable, it just means that the recorded gives up occasionally. Which is only fitting for recording a band that feels like they fall apart from their performance every once in a while, and the alcohol is the only thing holding it together.

The Venom worship is strong in the music, as can be expected from any extreme metal in the early/mid 80s, so most of the riffing is in a speed/heavy metal spectrum. But if it was merely a Venom worship demo, that wouldn't be very interesting. Instead you have a noise attack opener whose title translates to "The death of three 6 year old orphans by falling from Ferris wheel in Julius Fučík's culture and relaxation park", and a title track that is 17 minutes long and feels closer to a krautrock track than anything else, and even to this day I can't think of much that comes close to this kind of primitive black metal jam. It even comes with a bass solo. In black metal.

The vocals, in tune with the lazy production, sound more like incoherent ramblings of someone past the point of sobriety, who thinks that a hoarse baritone and the occasional yelps are the most evil thing that they can come up with. The trio is not exactly proficient with their instruments either, but the occasional groove and riff make Nekrofilie work on more than charm alone. The bass-heavy production ensures that this is unique from the sound point of view as well. And "unique" is still the strongest word to describe this with, alongside "odd", since black metal's fascination with the raw and primitive has taken it in many directions, but none that could really mimic what three drunk teenagers did in a basement in Czechoslovakia.

This feels mythical and mystic akin to an alcohol emanation. The Czech scene really deserves more dues, regardless of how much this release in particular had to do with setting its trajectory.

This has been yours truly's 666th review.

Written on 23.11.2022 by
RaduP
Doesn't matter that much to me if you agree with me, as long as you checked the album out.
More reviews by RaduP ››