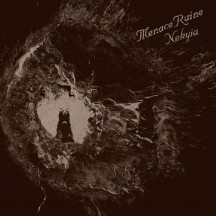 
The sky has turned grey. The soil has dressed itself with a coat of leaves. Autumn comes in full swing and Nekyia is the soundtrack to Nature’s funeral march.

The past couple of reviews, I’ve had the pleasure of writing about bands that have resurfaced from their slumber like a triumphant phoenix. Menace Ruine took their sweet time cooking up something truly marvelous for us to hear. It has been 8 years since the Canadian duo released Venus Armata. For a project that used to release albums every two years, it was natural to fear that their creative juices were running out.

The last 3 albums have been close to or longer than an hour. In stark contrast, Nekyia is their shortest album since 2008’s The Die Is Cast. This doesn’t tell us much about their music, though, as the band has always carried a unique sound that changes between releases. They’ve done black metal, drone-doom, neofolk and dark ambient. The changes in style are sometimes so sudden that it takes the listener a while before appreciating the stylistic choices. Especially when it comes to repetition and production values. Case in point, the first track, “Sadness In Vain”: a long, high-pitched drone leads the way as ritualistic cymbals and the ever so tender, yet enigmatic voice of Geneviève Beaulieu take over. The first track might be too long for what is essentially an intro, but it does a fantastic job at preparing you for Nekyia’s entrancing aura. The two following tracks, “Pigeon Rain” and “Umbra Horrenda”, are my personal highlights as they embrace everything the band is about. The drumming follows a tribal rhythm that does wonders in evoking the power of the seasons. The droning guitars of S. De La Moth are the cold winds that undress the trees. It is a constant drone, but not sharp nor abrasive. In conjunction with the synth work, it is soothing like a breeze. But dear heavens, Geneviève’s delicate yet potent performance steals the show. It’s just unreal how emotive her voice is. It melts my persona. “Umbra Horrenda” could very well be one of the finest displays of passionate singing this year. It’s most definitely witchcraft how her voice builds up to crescendos of serene grandeur. I succumb with tearful eyes staring blankly at the barren soil. It’s as if Mother Nature herself sang to mankind, manifesting in the flesh to take us in a tight embrace and forgive us for all our sins. All the sins against her wounded body. It is a voice as tragic as it is gorgeous.

This is not really a departure from their core sound, though. Menace Ruine’s music is still grounded in a well-balanced combination of drone and folk music, with the ethereal vocals being the glue that binds all elements together. That being said, the instrumentals are truly captivating on their own, like “Gift Of Joy”’s hypnotic opening riff. I always loved how the synths and effects on the guitars produce an otherworldly organ-like sound, as if it was an artificial, perhaps idealistic, representation of the natural world, with the tribal drums and vocals providing a human counterweight. But Nekyia can also showcase the feelings of impending doom. “One Last Song” and “Free In Farewell” engulf the listener with a cloak of melancholy with striking and at times unnerving clean guitars and synths respectively. “The Earth Is Stained”, on the other hand, sounds as menacing as the title suggests. The droning guitars acquire a black metal sensitivity that references the project’s older, harsher works like the doomy Union Of Irreconcilables and the experimental black metal debut, Cult Of Ruins.

Fans of the duo will rejoice at the presence of such solemn and grand hymns to planet Earth. Newcomers will discover one of the most inspiring acts of the drone scene.

Close your eyes, let the petrichor ease your worries, and drown in a sea of autumn leaves.