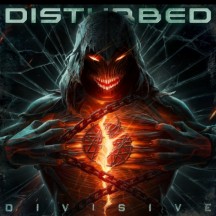 Since their reunion in 2015, Disturbed haven't been very disturbing, both either sound or style, shifting far from their past sound and into bland radio rock. Divisive is a poor choice of an album name, given that the record will likely unite people beneath a banner declaring it a boring album.

I can appreciate Disturbed wanting to distance themselves from their past; not only were they running on fumes by the time 2010's Asylum came out, but they had long hit the glass ceiling with a loud thud. What I object to is that the band have become so unthreatening and banal that they've turned into what they railed against back on 2000's The Sickness.

Divisive is a bland, inoffensive formulaic romp through ten mid-tempo tracks that wouldn't feel out of place on mainstream rock radio. Many of the songs feel interchangeable save for their choruses, which at least help to differentiate them from one another ("Love To Hate" and "Divisive" other meld together into an indistinguishable blob). As a result, you could save yourself some time by listening to one or two tracks and binning off the rest of the album if you don't have time or patience to endure a full playthrough.

The few songs that escape this monotonous fate do so only because they are on a whole other level of terrible. "Bad Man" (or Batman, as I often mistake it for) is perhaps the worst track Disturbed have ever unleashed, sounding like baby's first protest song with bland riffage to boot. When you consider the band have written songs about challenging topics, nor been afraid to tackle similar issues before, "Bad Man" is a steep drop off the quality cliff.

The positives aspects of Divisive revolve around the band rather than the songs for the most part. Disturbed still sound powerful and on point even if they don't bring it to bear on the album. Draiman's powerful voice is still there, though he has few moments to really elevate himself; the same is the case with Donegan and Wengren, who have their trademark tone, but don't take advantage of it.

The few passable tracks on the album include "Hey You", which, while the lyrics are facepalm-worthy, at least sounds like the band had some enthusiasm the day they recorded it. "Unstoppable" and "Won't Back Down" also have enough of a twist so as to emerge from the blandness with some defining moments scattered around.

While I understand the band don't want to return to their prior sound, they could at least meet fans halfway and produce some interesting material in their new style, rather than giving them Divisive and expecting them to jump on board a sinking ship.

Disturbed have become Mr Rodgers to their prior Freddy Krueger, not so much getting down with the sickness as easing themselves into an armchair for a cup of tea and a biscuit.

Written on 29.11.2022 by
omne metallum
Just because I don't care doesn't mean I'm not listening.
More reviews by omne metallum ››