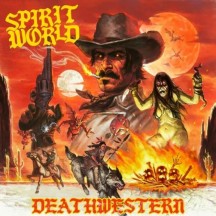 
"Western black metal had its turn now it’s time for western death metal." - a fellow user who was smarter before I was.

Western themes have been getting a bit of a surge in popularity, especially in black metal, with the likes of Untamed Land, Panopticon, Wayfarer, Dark Watcher, Hoofmark, and StumpTail all having some take on the sound without necessarily following the same pattern. But all of these are more or less black metal bands. So finding a similar approach from a different genre is a bit of a change. And who would be a better fit for it than SpiritWorld, a band whose 2017 demo was a punky alt-country record. The band did eventually turn into their current metalcore/crossover thrash sound, albeit one that had a wee bit of black metal in it on 2020's Pagan Rhythms, so the ingredients were all there.

Now, the first criticism that I can think of for Deathwestern is that, cover art, lyrics, and intro track aside, there's not a lot that actually integrates the western feel that you would expect from such a record. As someone noted in the RYM comments, you can't have a cover art like that and not "yee-haw" at least once. Take the presentation aside, and this is pretty much just a thrashy metalcore record, albeit a very good one. All those western-ish black metal bands went above and beyond to go further than just presentation, but maybe it is the expectation that SpiritWorld would follow suit simply because a completely separate genre did something is a bit unrealistic.

Western tales of blood, faith, and glory still make for a damn good hardcore setting. Hardcore is perhaps not as well known for its story-telling capabilities, so all the call-and-response gang vocals and the pummeling shouts of vocalist Stu Folsom make more immediate impact on their own. What is most impactful about the album is how much of a riff-fest it is. Sitting at the edge between hardcore and thrash metal, comfortably taking bits from all around that edge, from classic hardcore like Agnostic Front, beatdown like Hatebreed, metalcore like Integrity (whose vocalist has a guest spot here), crossover thrash like Power Trip, deathier thrash like Slayer, and groove thrash like Lamb Of God.

But all this presentation aside, I think what hardcore and the Old West have in common is sweat, and there's something about these riffs that metaphorically evoke that, weirdly enough. In a way, I wish the album did away with the Western presentation altogether because I don't want this to be pigeonholed as "just that Western HxC album", but rather on the strength of its plurality of riffs.

Written on 08.12.2022 by
RaduP
Doesn't matter that much to me if you agree with me, as long as you checked the album out.
More reviews by RaduP ››