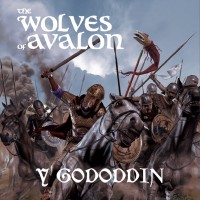 
The Wolves Of Avalon are certainly no strangers to providing history lessons to metallers about old British folklore, so if a legendary Welsh bard poem brought to you the traditional pagan metal way tickles your fancy then Y Gododdin might just do the trick.

So here's The Wolves Of Avalon's fourth release, Y Gododdin, and here they are joined by a mighty impressive list of guest musician appearances such as: Hoest (Taake), Thurios (Drudkh), Wulfstan (Forefather), Nico Millar (Aklash), and Tony Dolan (Venom Inc.), a list that seems quite astonishing even for a band that have previously worked alongside members of Sigh and Primordial. This all sounds great, doesn't it? However, a star-studded line-up such as this could always sound more appealing on paper than in reality.

Y Gododdin is an album which journeys through five tracks, where The Wolves Of Avalon delve deep into Great British historic events centered around the documented poems of Y Gododdin that were told by the legendary bard Aneirin. Here the band focuses their lyrical themes specifically on the events of the battle of Catraeth (a place in modern day Northumbria) during AD 600, where the Welsh tribal warriors of Mynyddog Mwynfawr, "The Wolves", rode alongside the northern Gododdin, to battle against the Angle Tribes in the last conflict of resistance against the Germanic settlers who massacred the Celtic people of what was to become England.

All set for an interesting tale if historic British Folklore is your thing, that is, so how does The Wolves Of Avalon go about turning these impressive tales into a pagan metal album? Well, if you're familiar with their three previous releases you might have an indication of what to expect, this is a band that have shown they can truly bring Celtic/pagan folklore to life through metal music.

The album begins with the track "The Murdering Night", which opens with a narrative tale alongside epic-themed music, featuring piano melodies, an acoustic guitar and synths added to the background. The track then builds up to which you then hear a traditional heavy metal sounding riff take place, with impressively layered vocals and synths added for an epic atmospheric effect. At this early stage it does sound relatively soft and more power metal sounding than pagan metal if I have to be honest, that is until the growls and screeches kick in, which can take you by surprise.

If there's one thing I admire about this album it's the outstanding variety of styles involved, there are times when you feel like you're listening to an early Iced Earth-inspired album, most certainly on "Dead Men's Cloaks", which sounds as if Barlow and Schaffer could have had a part to play, and you would be none the wiser, that's with its traditional melodic twinned riffing, along with that wailing guitar solo, and duo vocals between the aggressive and clean power metal vocal style. The album pretty much continues in this fashion, that is, with heroic and tragic bard tales through strong atmospheric soundscapes and striking folk melodies, and there's no shortage of interesting moments throughout each track.

Now, I would say the highlight of the album has to be "The Shining Company", this is a song which shows the true capabilities of what The Wolves Of Avalon can achieve. On this track they manage to retain the black metal vocal shrieks along with haunting atmospheres, but also keeping their softer parts and folk elements, whilst also providing one of the most impressive, and catchy riff melodies on the album.

Y Gododdin is much noticeably shorter than what the band have previously put out, and does seem to lack that overall aggressiveness for the most part, but makes up for that lack of aggression with its simple catchy riffing, soft folk melodies, epic storytelling and variety of instrumentation. But was it enough to capture the true extent of emotion behind the mourningful survivors' sorrow and untold glories and tragedies that the poem so vividly expresses? I'm not sure if it really does live up to that, however The Wolves Of Avalon have created a truly meaningful and entertaining concept, that is pleasing for metallers, and also provides a sense of justice for which the poem rightfully deserves.