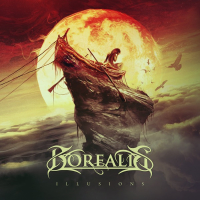 
Borealis are one of Canada’s leading and most consistent power metal bands at present. Their strong symphonic elements and progressive leanings push them towards the fringes of power metal greats such as Symphony X, Kamelot and Evergrey, so it's inevitable that Illusions will carry on this trend of strong releases, right?

Now there's no denying the fact that power metal is the ultimate love or hate genre in the metal music world, with words like cringeworthy, cheesy and flowery pop often being used to describe (often stereotype) the genre, especially by extreme metal fanatics who dare not to be shown giving in to their softer side, but eventually even the most extreme and hardened metal fanatics will come across an album labelled as power metal, that makes them think, “wow this is actually really good”, and Borealis are one of those few power metal bands to do just that.

Much earlier on in the year, Evergrey presented us with what arguably turned out to be the most impressive progressive power metal release of the year: A Heartless Portrait (The Orphean Testament). It almost looked as if no band would come close to topping the quality of that album, for me anyway, after all this hasn't exactly been a groundbreaking year for power metal, has it? Let alone progressive power metal. Well nearly half a year later Borealis introduced us to their sixth release Illusions, and as progressive power metal goes this is a pretty damn good one, especially when it comes to providing such epic symphonics, striking melodies, and intriguing storytelling.

Now let's start with the real treat here, which to me is the symphonics, that's all thanks to the multi-instrumentalist Vikram Shankar, who works wonders in creating and arranging those epic synth elements and orchestrations. The orchestral parts are used to immediate effect on the opening track “Ashes turn to rain”, which is as epic of an introduction to the album you could possibly hope for. Another stand out factor for this album is Fobert's highly impressive guitar work, the riffs are powerful, memorable, and traditionally melodic, none being more so than the heavy main riff on “Pray for Water”.

Now, surely Borealis can't go without providing us with a traditional power metal ballad? After all The Offering was brimming with them. Well “Burning tears”, is the ballad in question this time round, the traditional instruments and guitar work take a step back, and here Marinelli’s melodic raspy vocals, strongly resembling that of Tom S. Englund, really come into their own.

Whilst it's brimming with all the traditional power metal elements the structure of the album is actually progressive at its core, much as it were on previous releases, and the important thing about an album being so richly layered and textured like this is how they go about the production, and here it's impressively well produced, it's less compressed than their previous release The Offering, appropriately providing the right balance for the symphonics to shine without overpowering the instruments in the mix.

Now, is this release as good as Evergrey’s release earlier this year? No, I'm not exactly convinced it is, nor do I believe it's one of Borealis's best works as the sound quality does outweigh the songwriting substantially this time round, however it still contains all the right ingredients for an album of this genre.