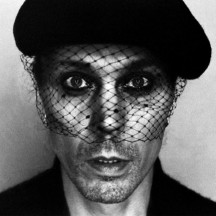 When looking back at rock music in the last thirty years, perhaps one the biggest impacts that has been overlooked was the one made by HIM, one that only seems to grow bigger with time. While HIM may now be in the rearview mirror, VV is the spiritual and, perhaps most importantly, sonic successor to the former band. Although Neon Noir skirts close to the former band's sound, there is just enough difference between the two that this album is a breath of fresh air.

This subtle difference is apparent from the opening "Echolocate Your Love", a strong first foot forward if there ever was one. Leaning more to the pop side of Ville Valo's previous sound, it ushers in the album by rolling out the red carpet. Neon Noir sees VV step out of the shadows of the heartogram... and into the darkness of the human condition. Though tracks like "Run Away From The Sun" errs too close to HIM fare, this isn't another HIM under a new name.

It is when you come across "Loveletting" and "Baby Lacrimarium" (a Roman-era vessel apparently used by mourners to collect tears... no, me neither) that the extent of the pop sensibilities on Neon Noir becomes apparent. It is an interesting sonic journey to the other side of the HIM sound, one that is as engaging as the former, as it takes the other path in the fork in the road.

"Neon Noir" sees Valo's vocals shine; his ability to channel morose feelings while also sounding upbeat has not dimished in the interim years. Indeed, it sounds as if he hasn't aged at all, sounding like not a day has passed since Tears On Tape. This is perhaps the most potent element on the album; although it features some haunting instrumental refrains, it is Valo's voice that remains the center point, as he ranks as one of the best vocalists for this kind of music.

It is when Neon Noir is at its unabashed poppiest that it excels; "In Trenodia" and "Saturnine Saturnalia" capture the balance between HIM-esque brooding melancholy and upbeat pop, which make for an interesting sonic collision. Not that Valo has to escape the shadow cast from his past, but it is evident he knows how to write a hook.

However, I doubt this new turn of style will be to everyone's liking, finding itself in a niche whereby it's too heavy for pop rock fans and too pop for hard rock fans; it is a path that Neon Noir walks in style, but one that some may not wish to tread down themselves. The same can be said of certain tracks; the aforementioned "Run Away From The Sun" sounds like a diluted version of HIM, which I doubt will please either group.

HIM is dead, long live VV.

Written on 13.01.2023 by
omne metallum
Just because I don't care doesn't mean I'm not listening.
More reviews by omne metallum ››