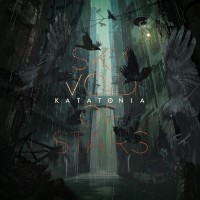 
I have a sort of on-off relationship to Katatonia. You know, the one where you break up for half a year and then against all odds decide to try again, and again, and again. After Dead End Kings... something happened. They lost me. And they still have. It had been a long time coming, but gone were the glorious doom riffs and so-catchy-it’s-not-even-funny choruses, and instead Katatonia entered yet another experimental phase. A more laid-back, electronic, mellow-proggy phase that simply did not click with me. A thinner, too alternative-sounding production that failed to bring forth the majestic gloom and doom of previous albums. “Alright,” I said to myself, “perhaps The Fall Of Hearts and City Burials are the Discouraged Ones and Tonight’s Decision of this new Katatonian phase, and third time’s the charm?” It’s just that, it took them yet another uneven album, Last Fair Deal Gone Down, to finally reach that sweet, sweet spot that Viva Emptiness hit - like a shotgun pellet rain of poisoned absinthe straight through the chest, with the band surfing on a wave of blood all the way to Dead End Kings.

I know, I know, I haven’t even started talking about the actual album in question yet, but there was a point to that entire history lesson. If you don’t get the point, read it again. If you don’t see the same pattern as I do, think again. I fully respect Katatonia as musicians, and I respect that they are willing to try something new, but what I don’t respect is an album that sounds so flat, hollow, and static that the music on it, that’s supposed to be lush, melancholic, and heavy (even if not in the traditional “heavy metal” sense), just floats by without making an impression at all. Listen, I have no qualms at all about Katatonia having changed their style, I have no qualms at all about them not being particularly metal anymore, and I have no qualms at all about the sort of moods they are going for here, but songs are supposed to have hooks. Katatonia used to have verses and choruses that you simply couldn’t get out of your head even with a nuclear-powered screwdriver turned up to eleven. Not even the singles, "Birds" and "Atrium", have anything particularly memorable about them. Sky Void Of Stars has a few standout moments, such as the brassy synth hook on “Opaline” and the gorgeous chord progressions and anthemic guitar solo on “Impermanence”, and the Viva Emptiness-worthy “Atrium”, but even on "Atrium", the vocal lines just float in the void, supported by… not much at all, I’m afraid, because here comes the next big problem: the god damn sound, man.

There is no dynamic range to anything, and even when the songs manage to carve out an identity of their own with a cool part here or there, it all just blends together into a slow-to-mid-paced caricature of something that could have been good, but simply isn’t fun to listen to at all. Take “Author”, for instance, which contains just the sort of excellent metalli-melancholic riff I used to love this band for. I’m not supposed to have to imagine a theoretically good riff actually sounding good! Take the last song, “No Beacon To Illuminate Our Fall”, and try to remember it 10 minutes after the album is over. In fact, put on a random section of the album and try to guess which song it is. See? You can’t. Now, bring to mind a few of the actually good riffs I’ve mentioned, and imagine that the music actually sounded good as well. Then we’d have one half of a mostly decent album, at least. Why couldn’t they just have opted for a production job like the expansive, crushing sound on Night Is The New Day? Why do they have to ruin music like this? I can barely hear the guitar! Is this a joke?

Hence the history lesson in the beginning. I am for the love of all that is unholy hoping that the pattern repeats and that this will be their final tryout album before they realise what they need to do to get their shit together again: write songs with parts you can actually remember, and buy the biggest boot you can find, put it on, and then aim it straight at whoever decided “this is the lame production we want” and kick him or her straight out the nearest fire exit. Then write one of your sad songs about it and do it right the next time.

The performances and the originality cannot be denied on Sky Void Of Stars. Every musician does their job flawlessly and no other band sounds quite like this, but the songwriting won’t go down in any history books and the production makes everything simply dull. I’ve opted for using only integer ratings from 2023 onwards, so on account of aforementioned historical pattern I will give Katatonia the benefit of the doubt and round upwards to “average”.