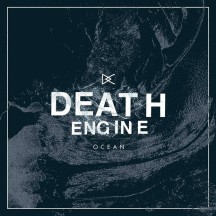 
The engine briefly ran quiet, but the Death Engine is back in action, returning with Ocean. It’s been a long time since we last checked in with this band, so what better time than now to see what they’re up to?

Ilham’s review of the French group’s debut record Mud back in 2015 was my introduction to Death Engine; it was a great record, but I rather lost track of the band after its release. I remain relatively alone in my friend circles (although perhaps less so among the userbase of a site such as Metal Storm) in having a digital music library on my phone of purchased albums instead of relying on Spotify; perhaps archaic, but it does force me to keep scrolling over albums I’d otherwise have forgotten and eventually get round to giving them another listen. The inspiration for me to revisit Mud was coming across the announcement that Death Engine would be releasing a new record in early 2023, and having given their debut a few spins in the past week or so, I’ve been pleasantly reminded of what a great mixture of hardcore, noise rock and post-metal it was.

However, there have been developments since 2015 that I’m only just becoming privy to; a second album in 2018, Place Noire, was followed by a brief break-up in 2019, and subsequent unspecified line-up changes since the reunion, although the only person I can identify as a current member from the information I find online is guitarist/vocalist Mikaël Le Diraison (side note, this is the first of 2 albums I’m reviewing this month that is from a post-metal band I discovered in 2015, only to miss the release of a subsequent record in 2018 and only reacquiant myself with them due to a January 2023 release; a very inane coincidence perhaps, but one that intrigues me at least). Therefore, Ocean, an album title inspired by the unknown, everchanging and unstable nature of the ocean, brings curiosity over how time and personnel changes have affected Death Engine.

In an earlier paragraph, I described the sound on Mud as drawing predominantly from hardcore, noise rock and sludge/post-metal; while I would describe it as a hardcore album first, the other parts of the equation were substantial in their influence, and the coalescing of aggression, intimidating sound choices and atmospheric gravitas resulted in an incredibly effective record. Ocean copies Mud in having 7 tracks, and the album runtime is similarly brief at 36 minutes, yet this time around, sludge/post-metal has become more of a dominant component of the sonic composition of the record. The tracks haven’t ballooned in length to match this, as 4 out of 7 are under five minutes, so the shift is driven less by Death Engine depending upon protracted multi-minute gradual builds, and more through them significantly dialling down the prominence of fast-tempo hardcore viciousness in favour of a more measured, sombre approach.

In one way, I do feel like this change in approach slightly hinders the ability of Ocean to stand out to quite the extent that Mud was capable of; I’d argue that Death Engine’s debut is a bit more compelling and engaging than their latest is. However, setting aside such comparisons, this new album is very much a strong effort in its own rights. To some degree it reminds me of Abraham’s album from last year, albeit with less dissonance; I prefer Death Engine’s approach, however, as the vocals are more fitting, the builds have more payoff, and the atmospheres are generally more compelling. This applies to both the heavier songs, such as “Hyperion” (on which I love the tom-heavy drumming in the more restrained passages), and the more subdued ones like “Mess” and “Dying Alone”.

All this isn’t to say that there isn’t still hardcore to be heard here; the strongest example to the contrary is “Lack”, a relatively abrasive centrepiece of a song with some bursts of aggression amidst its drum-driven noise rock vistas. That being said, it comes fourth behind post-metal, sludge metal and noise rock in the makeup of Ocean, and even as someone who generally is less interested in hardcore than the other three styles, there was something about the way those styles enhanced the hardcore on Mud that makes me slightly miss it here. As said, though, when focusing just on what is present on Ocean, something that is used a bit more this time around is incorporating softer, gentler tones; “Mess” changes track midway through from glumness to something more delicate and charming, the kind of passage that could have turned up in the lighter sections of Isis’ Oceanic record. Another portion of the album that goes in a similar direction is the final third of lengthy closer “Empire”, which again leaves behind a brooding, ominous darkness towards its conclusion in favour of something more melodic and evocative.

In finding areas of Ocean to pick out as highlights, I’ve alluded several times to the drums, and they are a standout feature here, performed by Joris Saïdani (also Birds In Row), who appears to be a studio rather than full member of the group. The heavy tom use really helps the atmospheric side of this record make an impact; the guitars are similarly well produced, offering a wide range of intensities to match the intended impact of the approach of the guitars in a given moment, whether full-on sludgy bite, semi-clean dissonant chords, or fully withdrawn clean passages. Ultimately, putting aside my own personal preference for Mud, Ocean is a very respectable return from Death Engine following their turbulent recent history.

Written on 16.01.2023 by
musclassia
Hey chief let's talk why not
More reviews by musclassia ››