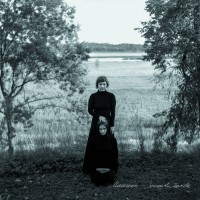 
Second Death is the conveniently titled second release by Finnish doom band Mansion. As doom metal goes this band have a rather different approach to things as they opt for a more theatrical approach in a haunting horror setting, as opposed to the traditional doom way. Sound interesting to you?

Back in 2018 Mansion introduced us to their first full length debut First Death Of Lutheran, and from this early stage they have shown an indication of becoming a cult act, with a style maybe more suited for a specific audience who will perhaps appreciate this unorthodox doom method of approach, more than those who simply prefer doom metal bands to keep things within the traditional boundaries, in other words Mansion are more likely to be a hit or miss act in the metal world.

By now you may have gathered Mansion aren't your typical doom metal act, and the prime culprit for this is their theatrical vocal styles, which even at times sounds like a narrative tale telling scenarios from horror stories. Although these vocals aren't particularly my preferred choice when it comes to doom, they do add a sense of originality to the album. The vox act as a duo between Alma's female and Osmo's male vocals, both of similar style, but it's the female vocals I find most fascinating in this case, her witchery theatrics have a rather bizarre hint of Kate Bush; weird, I know, but intriguing for the listener, I admit.

Although not without its flaws I believe the structure is reasonably adequate, despite the vocals at times sounding a little disjointed from the other elements featured. Here you have a typical heavy doom sound and approach, with the obvious instrumental elements such as the deep heavy guitar tone with the occasional fuzz tone for added effect, as well as the heavy bass and deep cutting sludgy mid-tempo riffs, all of which aren't exactly out of the ordinary. What does stand out most is the synth work, which creates the all important haunting atmospheric soundscape, the one engaging element aside from the vocals, I would say.

The track lengths are certainly on the long side, by which case none of the eight tracks run under six minutes. The closing two tracks are of the same title "You Are Suspicious", the closer being an extended version of the latter, both tracks being amongst the longest on the album, and unfortunately neither really have me the wow factor that I presumed they would. There are several moments throughout the album I find striking, the track "No Funeral" for starters, with its eerie atmospheric build up which brought me back to the main build up on the iconic "Black Sabbath" track, and the haunting vocals fit this particular part very well as they remind me of Ozzy's creepy narration during the epic build up. However, I found the track didn't necessarily lead to anything memorable, unlike "Black Sabbath" which ended in a fantastic Iommi solo; a slight disappointment in my view.

Overall Second Death isn't going to work for all doom metal fans, or metal fans in general, but there's no denying that Mansion have done a grand job creating creepy atmospheric settings through impressive synth work, which makes up for their less than inspiring instrumentation, and the vocals although not to everyone's taste add a unique character and charm. So don't be surprised to see Mansion form their own cult following in the near future, you can bet they will.