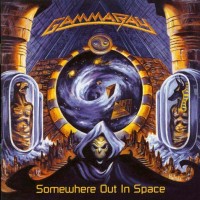 
Melody overload with drums like a thunderstorm, that's the shortest way I would describe GammaRay's 'Somewhere Out In Space', not that melody is a bad thing, but when you drive the melody throughout a whole album by force it will get somehow weeker.

Besides the outstanding 'Valley Of The Kings' (which was released as single) most of the songs on 'Somewhere' make a solid impression. Though everything is played in technical brilliance the whole album is not the most convincing, not that it's not good, only I wouldn't listen to it more than once per month, maybe even less, because it's pretty much the same all the time. Everything delivered is not so very unique (I'm talking about the songs compared to each other) and I'm missing the edges and highlights. Somewhere Out In Space's concept sounds to me like every song should sound like a highlight of it's own, but that makes it somehow flat (in my opinion) and I get bored easily. As mentioned above you cannot criticize the technical brilliance, but it's simply overdone. After the first song you will know what you gonna have for the rest of the 58 and a half minutes long album.

In general I would regard this album as influenced by Iron Maiden (Somewhere In Time; the sound, not the title) and Queen (especially the multi-vocal-choruses and choirs), which is remarkably good, but even passages that should sound dramatical or sad… etc. like: 'the guardians of mankind are losing their faith' sound like a happy hymn and so does the whole album. Overdone with heroic feeling every song sounds like a glorious victory over some evil villain, except the ballad 'Pray' which still is heroic but also a little little bit pensive.
'Winged Horse' is started with a drum intro and 'Cosmic Chaos' is a short drum solo used as intro for 'Lost In The Future', which quotes a funny melody (famous one, but I don't know the title), but in general tends to crete desperateness. 'Watcher In The Sky' is quite good, too, but does not reach 'Valley of the Kings', but the song features guest guitars and vocals by Piet Sielck (Iron Savior). The album ends with over-glorifying 'Shine On', good for the purpose of saying good bye.

Conclusion: Somewhere Out In Space is not a bad album, I give it a 7.0, but it is exaggerated regarding that every song tends to be a highlight, thus flattening and tiring the listener, in my humble opinion. It could be better with more highs and lows instead of highs only. I recommend: listen first before you buy this album. It's not the optimum for everyone.
Written by Pierre Tombale | 17.02.2004