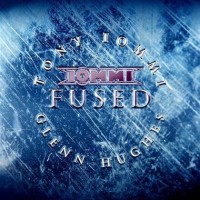 
No need to present Mr Tony Iommi and his acolyte Glen Hughes, right? Should I have to do that really? No, I don't think so and I suppose that a lot of you already know his precedents solo albums. But today, we're not here to talk about the past but the present and the present of Iommi is a new album, "Fused," a must for the fans of Hard FM…

Yeah this is a must for the fans of this kind of music actually, really melodic and catchy with some dark compositions however, all the songs of "Fused" are great really, and when I listen to the album actually I really think that it could become a "good" album of the style. However, this is really classic, not really original and new. But on the other hand Iommi has nothing to prove if you see what I mean. When you buy an album of the "band" you always know that you'll have this kind of music, they never take any big risks but at least that's always correct and that's always good music.

"Fused" is really well produced, with a really good sound (is it a real surprise?) and in the style let me tell you that we're in front of a really nice album. Evidently I cannot blame Tony Iommi or Glenn Hughes, these two guys are on the list of the best musicians but as I said before the 10 songs are in the true spirit of the Hard FM of the 90's with in addition, the magical "rock n roll" guitar-playing of Tonny Iommi. The riffs are heavy and loud, the melodies are always nice and give a lot of emotions, it's hard to find something wrong with this album.

If you're a fan of Iommi "Fused" is a must for you, the album is well done and musically interesting, but however I regret the lack of originality and above all the fact that Iommi doesn't take any risks on this new release. It's good Iommi music but it's also a really classic album without a lot of surprises. That's up to you actually if you're just looking for a new album of the master just don't wait any longer but if you're looking for something new, just have a try first (remember, however, that we're in front of a really good album that only lack of originality…)
Written by Jeff | 06.07.2005