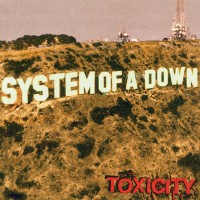 
System of a Down created a huge hype for the nu-metal scene back in 2001 with an album called "Toxicity"; to this day the mentioned album is still a best seller in many stores and we can hear many people talking about the greatness of this album. I bought this album a while ago, I heard it a lot of times I liked it the first few listens, but after a while it bored me big time and then I even sold it to a weird kid with an emoish hairdo.

This is not a bad album at first sight, the first listens you'll find good guitar structures, catchy songwriting and even a lot of funny lyrics which, for example, talk about a guy who has a pogo stick and every single person wants to play with it but can't because there is just one pogo stick at the party with so many friends ("Bounce"). So as you might know, this kind of things are cool the first 3 times you read it, but when you hear it the fifth time or the sixth time it becomes really boring and idiotic.

The album fails in continuity, and this is the epitome of good albums you know? Most albums MUST have good schemes for you to hear it 50 times without a problem, SOAD was not able to achieve this task. Then the riffs are not powerful at all, the backing vocals are just hideous and really fucking annoying (f.e. "Needles") the drumming is monotonous, there's no strength whatsoever in the whole album and it becomes a "nerd"/idiotic/ridiculous release.

This album is not as good as many people think, there are good moments with schizoid riffs and crazy paces ("Psycho") but that's it, most features "good" decompose badly after a week or so. Not even "Chop Suey!", which was one of the most praised tracks in nu-metal history, manages to create a constant interest for the audience, just imagine the rest of the songs.

So this is an average nu-metal release, certainly I've heard better albums and also I've heard worse ones. Is it really that good? Not at all, it's totally disposable; I just keep thinking "why in the fuck didn't I download it first". This is exactly the kind of album which makes metal-heads hate nu-metal, it gets a lot of hype and everyone talks about how great it is, but in the end it's just a plain, average, middling and nerdy release, nothing more nothing less.
Written by Herzebeth | 30.04.2006