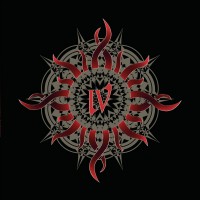 
I never really got what the big fuss about Godsmack was and their latest release, IV doesn't do anything to convince me that they are anything more than an average alternative metal band with a vocalist who tries really hard to sound like James Hetfield.

Records like IV are a bit tough to evaluate. The problem here isn't actually that the band is doing something that is clearly and essentially wrong. On the contrary - they obviously know how to play this type of music and they show it on all the tracks on this album, whether it is the heavy post-grunge of "The Enemy" and "Speak" or the introspective and mellow "Hollow" and "Mama". Therefore, the problem is actually that the band is unwilling to take chances and as a consequence never reaches the heights of the bands that influenced them. All of this results in a well played record that is ultimately not very memorable and is easy to dismiss as commercial post-grunge that occupies much of rock radio waves these days. Sully does have a powerful, if somewhat unoriginal, vocal delivery, the drummer really knows what he's doing behind the set and the guitarist knows how to churn out a catchy riff. All of this potential is sadly wasted.

This is why Godsmack is still a pretty mediocre band in my eyes. They might be good at what they are doing but what they are doing is recycling clichés. Obviously, this does not make IV an unlistenable album but if you are looking for something more in music, go look somewhere else.

Written on 07.05.2006 by
jupitreas
With Metal Storm since 2002, jupitreas has been subjecting the masses to his reviews for quite a while now. He lives in Warsaw, Poland, where he does his best to avoid prosecution for being so cool.
More reviews by jupitreas ››