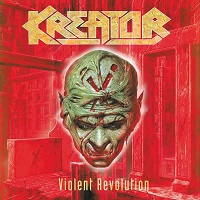 
This album marks another turning point in the career of the German thrash kings Kreator. This time, with Violent Revolution, they have decided to go back to their roots. What makes this transition even better, however, is that they aren't just merely plagiarizing their older material. Instead, this sounds more like a natural progression from those albums, albeit with a few twists and turns in between.

Now, in all honesty, this isn't the fastest or heaviest thrash album on the market today. But that's in no way a bad thing. With Violent Revolution, Kreator have displayed some of the best songwriting I've heard from the thrash scene in a long while. They have found what is quite possibly the perfect combination of speed, aggression, heaviness and melody. The number of great riffs on this album is enough to make just about any other metal band turn green with envy. The arrangements are terrific, and the production is flawless. Need I go on?

One example of this is the title track. I simply LOVE this song, and have found myself listening to it over and over again. Even without knowing the title, the fact that it's very much a metal war cry for the new millennium is established in the opening lines:

Amen, brother! Here are a few more fantastic lyrics from this song.

"Nothing can take this horror from me
Your sick world, the loss of all morality
My hate has grown as strong as my confusion
My only hope, my only solution -
Is a violent revolution!"

"I do not need a cause for my rage
I just despise the nature of the human race."

It doesn't get much better than that. I love lyrics that actually mean something.

Another standout track, Second Awakening, serves as an analogy for this record, as that is very much what this album is: a second awakening for Kreator. And what a Violently Revolutionary awakening it is.

It gets the 9 out of 10, because, unfortunately, not every song reaches the level of greatness of the two I mentioned, but enough to do to warrant calling this one the trash metal album of the year.
Written by Rupophobic | 19.09.2003