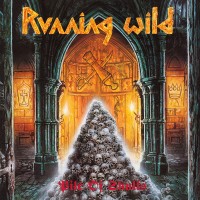 
Speed Metal is a very obscure subgenre. Those who think it is just fast power (because of the old Walls Of Jericho), is wrong, because DragonForce isn't speed metal. It has a different sound. Speed Metal is, mainly, seen at the late 80s in Germany. Running Wild is one of these bands, and this album the best of them.

Pile Of Skulls is Speed Metal. So don't expect any ballads or some complex songs. Here you'll find simple, fast, and catchy songs (just like with most power metal). With an introduction, 10 songs, 1 of them being an epic, this album clocks at almost 1 hour, so this isn' a short album.

A thing I'd like to comment about Speed Metal is that most people just know Painkiller and Walls Of Jericho. Well, this album is so good it can even compete with those two. And, the best of all, this isn't simple Speed Metal. You can call me a fool, but this is Pirate Speed Metal. Yes, another stupid subgenre but this album really sounds like pirates to me. And how many bands do you know that play pirate music; it is metal, and it is good music? Just Running Wild. So they score a 10 in originality (even almost all their albums are about the same).

But this album has some minor flaws. Even the album could sound monotone at the first listen, you'll discover then that each song is different. The main problem with the album, is that not every song is awesome. "White Buffalo" and "Jennings Revenge" are not-so-good, and maybe "Fistful Of Dynamite" as well. Not that those are bad songs, but not so memorable like the others. I just can't find other flaw than this.

On the other hand, songs like the opener (plus cool intro), the epic "Black Wings Of Death" (it sounds epic to me) and "Treasure Island," and the blasters "Pile Of Skulls" and "Lead Or Gold" will be on your mind for months. As a minor note to myself, see how every previous pirate metal opener is better than this. Not that "Whirlwind" is bad, but it was just almost impossible to make a better opener than "Blazon Stone" or "Riding The Storm."

So, if you like Pirates, Speed, rum and plundering, get this album!