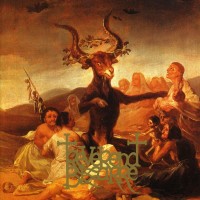 
Have you ever wanted a band that that sounds like My Dying Bride with clean vocals, and with some Black Sabbath riffing too? Well, I think I have exactly what you need,
Reverend Bizarre, a relative new but still quite famous Finnish Doom band, that's re-releases their first album (2002) through Spikefarm (sub-label to Spinefarm), with which they just inked a deal with.

And together with this re-release you'll also get a bonus disc, which contains 6 totally new songs, one unreleased track from their second and latest full-length album "Harbinger of Metal" and a video from 2001 of the song "Doom Over the World". That's a lot, and I mean a lot, over 2 hours of music plus a video and the price for whole this package should be around the same as for a usual single album.

But, you should also know that these two albums separate a bit from each other, what I said in the beginning was what the re-release album sounded like, much like My Dying Bride with Black Sabbath riffs and clean vocals and in a very slow tempo, no fast song.
The bonus disc (that reflects how they sounds today, I guess) is quite much different. First of all has the vocals changed, the singer Albert (Magus) sounds darker and older (which is quite natural, at least the second) and the music has actually evolved a bit too, if the similarities with My Dying Bride was too present on the debut, they're smaller here.

But Reverend Bizarre still feeds in the land that My Dying Bride created, and I think it will be difficult for them to get off that stamp, but personally I don't care. Even if it's smells MDB I like it a lot, the slow and emotional music RB creates touches me deeply and I simply love it. I know it's wrong to dub a re-release as the album of the year, in a genre, but I feel that this album (albums) deserves that stamp more than anything else I heard from the Doom this year.
A simply, perfect, fucking Doom Metal album, and a perfect present meanwhile we're awaiting their new album "Crush the Insects", that should be recorded as we speak.