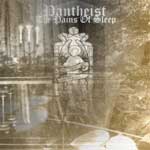 
Pantheist, allow me to say that, so far have managed to pave their own path in the fields of funeral doom, something difficult-seeming since almost everything has been set during the 90s, yet something so easy judging from the words of Kostas Panagiotou, simply because it's a matter of personal expression and experience. It's true that bands like Pantheist are needed since they offer fresh air to the scene and it's always awesome to see them progress their sound from album to album. After two magnificent releases, "O Solitude" and "Amartia", a new and strong line-up and a change of geographic base Pantheist are ready to make their next break-through in the fields of doom, but before that, we can take a glimpse of what will follow, but also a taste of how it all began.

"The Pains Of Sleep" is not the new full-length release of the band, it's a nine-track EP that offers two new compositions, a cover on Katatonia's "For Funerals To Come", a live video of "Envy Us" and their first and only demo, "1000 Years" (2002). Don't let the term EP misguide you, we're talking about more than 60 minutes of beautiful, dark, devout and intense music that will take you on a journey through the inner realms of your existence. The two new compositions, the title-track and "Pavor Nocturnus", are here to show the face of the band at the moment, which actually shows progression since "Amartia". "The Pains Of Sleep" has to be one of the most devout compositions in the whole funeral doom metal scene. These overwhelming ecclesiastic (that's exactly the right word to present part of Pantheist's atmosphere, so is the cover of this EP) chanting vocals cleanse your soul and along with the entrancing church organ sounding keyboard or enchanting piano melodies, the heavy and slow riffing and the imposing rhythm section you find yourself among the realms of heaven, to finally drown in regret in the crimson lakes of hell through the emotional outburst with the grunting and powerful vocals that bleed with sorrow and bitterness. "Pavor Nocturnus" although it may seem tranquil in its very beginning, as it goes on it grows darker and more menacing, consealing all calmness as it slowly unfolds its nightmarish soundscapes through distressing floating keyboard melodies (that present a more psychedelic rock oriented air as the song martches towards its end), combination of hysterical grunts and clean chanting vocal lines and slow heavy guitar riffing. As the song flows the tempo becomes slightly faster (a strong addition have to be the soloing guitars) and the overall atmosphere more overburdened, but somehow not so unearthly as before and that's what i loved in this composition, its duality in terms of atmosphere, at first it was dark, then more delightful! The cover on Katatonia's "For Funerals To Come" is succesful, there where once were lying acoustic guitar chords the melancholic piano melodies and the serene keyboard melodies have come to blossom and the role of Renske's unearthly and dissonant recites was taken by Andy's chanting vocal lines and whispers. Actually, Pantheist managed to make this very good song a masterpiece and dress it with the black veil only they know how to weave.

And then the re-mastered version of their demo "1000 Years" follows, unfolding all these elements that established Pantheist in their very own funeral doom sphere, elements at a primary phase, yet showing clearly what would follow. After the success of "O Solitude" and "Amartia" the official release of their demo was very important since the fanbase of Pantheist was longing for something like that. So, this dream became a reality and everyone can bear witness of how everything started and with a better sound this time. The first versions of "Time", "Lust" and "Envy Us", that later found their place in the full-length releases of the band, are here, along with the "Intro", the title-track and a piano/keyboard-driven masterpiece dressed with recites and chanting vocals that will mesmerise your senses, this song is "Liefde Voor Niemand", a song i still consider as one of the most beautiful and emotional ever composed by the band.

"The Pains Of Sleep" is a must-have for the funeral doom metal scene since it comes from a band which progresses its own sound step by step and another gift for all the Pantheist fans, the most ideal one at the moment! Close the lights, light a few candles in memory of loved ones and seek them in the devout beauty of the dark that Pantheist wholeheartedly created...

Written on 05.10.2006 by
KwonVerge
"It is myself I have never met, whose face is pasted on the underside of my mind."
More reviews by KwonVerge ››