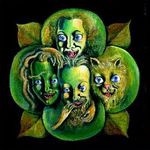 
Phideaux Xavier, Rich Hutchins and Mark Sherkus, the core of Phideaux, have been really productive over the last couple of years by issuing their work on their independent label Bloodfish Music. Just releasing "Chupacabras" at the end of 2005 and "313" in March 2006, they have now taken up a trilogy about "Big Brother" world. The first part of that, their fifth album "The Great Leap" was released this September and the second part "Doomsday Afternoon" is coming out tentatively later in the year. Given the aforementioned information, one would think that the quality of the writing as well as production could suffer. However, this does not seem to apply to Phideaux, and especially not to the album at hand "The Great Leap."

Phideaux are essentially a Progressive Rock band with variations to one side or the other. Having labeled them a Prog band, I must say they are not aiming at producing overly complicated songs and technical solos in the first place. On the contrary, their music is primarily built around naturally flowing melodies, natural developments of sound, voice and lyrical content. Although the music is catchy and may seem simple on the surface, it is hardly that at the second glance. At times I figure their layered instruments can make an onion seem like an apple. I have been listening to "The Great Leap" non-stop for a while now but every time I listen I find something I had not noticed before.

The music itself is guitar oriented with a fine guitar play, both acoustic and electric. While I did mention that solos are not an objective on itself, there are fine solos that fit songs like a glove. Furthermore, good song developments and transitions are still built around guitar passages. Take "Rainboy" with some great riffs and a solo in the middle, practically the same can be said about "Long and Lonely Way." Furthermore, those good developments are accompanied by an excellent rhythm section: fine bass, great keyboards and, as already mentioned, an excellent layering of other instruments and effects.

This layering has resulted in an album full of songs that practically lack the empty gaps that make one think that something could have filled the void. The choice of fillings is very fine-grained: a keyboard effect, a click and a drum-beat here, a bass move and a piano there. I do not recall Phideaux making much use of orchestrations on the previous albums but "The Great Leap" sees a very good addition of strings, like violins and cellos, and various wind instruments, like trumpet and trombone. Careful use of orchestrations has made quite some memorable impressions, especially the great sound of cello in "You and Me Against a World of Pain" and "Abducted."

A very important dimension of the band's music is Phideaux's singing and the way he delivers different songs. Having quite an emotional singing style, clear, clean and quite high voice, he adds a facet of sincerity to the music. At the same time he manages to put in a fair amount of theatrical performance making it all even more lively. Fine examples are "The Waiting," "They Hunt You Down" and "Rainboy" with some finely stressed lines with expressive impression of delivering poetic verses. This all taken together creates a positively tuned atmosphere with feelings of contentment, hope and even happiness.

I expected "The Great Leap" to be good. Previous albums have raised a certain level of confidence and trust in bands output, and that is not something that happens overnight - it is earned by putting out consistent high quality music. I did not expect "The Great Leap" to grab me as much as it did but it has had a great impact on me over the last two weeks. I am inclined to think that "The Great Leap" is indeed a great leap.