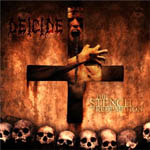 
01. The Stench Of Redemption
02. Death To Jesus
03. Desecration
04. Crucified For The Innocence
05. Walk With The Devil In Dreams You Behold
06. Homage For Satan
07. Not Of This Earth
08. Never To Be Seen Again
09. The Lord's Sedition
10. Black Night [Deep Purple cover] [Limited Edition bonus]


The last time I enjoyed a Deicide album was back in 1992 when "Legion" broke my neck and liquefied my brain cells, then after their following releases I just honestly lost track of this band. Few years later (Present Day) the rumors about a great EP began to circulate all over the Metal scene, everyone was excited about it and they barely could wait for the new Full Length to arrive, so I followed. Finally I received this album to review, and now I'm about to describe one of the greatest Death Metal albums of the present days.

The Stench Of Redemption is one of the most intense experiences in modern metal; every single track has a life of its own due to the outstanding songwriting presented, every chord played, every tone reached and every solo completed shows a polished band to the core, Death Metal in its shocking best that's for sure.

There's a huge plus in The Stench Of redemption. This new line-up could be the dream-team of Death Metal; you have two of the most complex guitarists creating all kind of merged leads and solos for the music (written marvelously by Steve Asheim) to become utterly impressive and tinted with the shivering voice of Glen Benton. This is seriously one hell of an ensemble to say the least.

Most of the fanatics already know the tracks presented in the EP ("Homage For Satan" and "Crucified For The Innocence") this songs are amazing indeed, but once you get into the astonishing vortex that this album is, you'll see why Deicide rapidly climbed to the top this year. Those songs that manage to sound versatile yet classic, songs like "The Lord's Sedition" with its progressive connotation, "The Stench Of Redemption" showing super-catchy riffs, "Walk With The Devil In Dreams You Behold" bombarding the listener with melodies and violence at the same time, (just to name a few) are the ones that bring this album to the ultimate climax, a peak that reaches re-playable values where you'll find a better feature each time you push play.

This album is surely a masterpiece and it will surely become a classic record in the future; the only small imperfection is the production that sounds occasionally dry, but when you have a killer album like The Stench Of Redemption things like this become impassive because your attention goes directly to the remarkable music. I highly recommend this album, DO NOT miss this release.